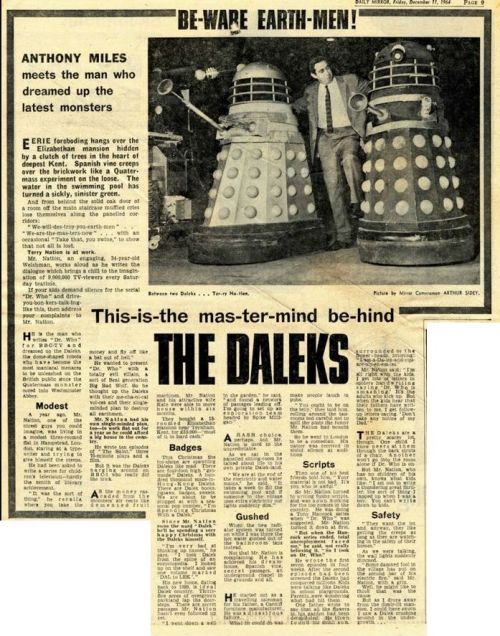 ANTHONY MILES meets the man who dreamed up the latest monsters

EERIE foreboding hangs over the Elizabethan mansion hidden by a clutch of trees in the heart of deepest Kent. Spanish vine creeps over the brickwork like a Quatermass experiment on the loose. The water in the swimming pool has turned a sickly, sinister green.

And from behind the solid oak door of a room off the main staircase muffled cries lose themselves along the panelled corridors:

"We-are-the-mas-ters-now" ... with an occasional "Take that, you swine," to show that not all is lost.

Terry Nation is at work. Mr. Nation, an engaging, 34-year-old Welshman, works aloud as he writes the dialogue which brings a chill to the imagination of 9,000,000 TV-viewers every Saturday teatime.

If your kids demand silence for the serial "Dr. Who" and drive-you-bon-kers-talk-ing-like this, then address your complaints to Mr. Nation.

HE is the man who writes "Dr Who " for BBC-TV and dreamed up the Daleks, the dome-shaped robots who have become the most maniacal menaces to be unleashed on the British public since the Quatermass monster oozed into Westminster Abbey.

A year ago, Mr. Nation, one of the nicest guys you could imagine, was living in a modest three-roomed flat in Hampstead, London, staring at a typewriter and trying to give himself the creeps.

He had been asked to write a series for children's television-- hardly the zenith of literary achievement.

"It was the sort of thing," he recalls, where you take the money and fly off like a bat out of hell"

He wanted to present "Dr. Who" with a totally evil villain, a sort of Beat generation Big Bad Wolf. So he thought up the Daleks with their me-cha-ni-cal voi-ces and-their singleminded plan to destroy all earthmen,

Mr. Nation had his own single-minded plan, too-- to work flat out for a year so he could afford a big house in the country.

He wrote ten episodes of "The Saint," three 75-minute plays and a film.

But it was the Daleks barging around on BBC-1 who really did the trick.

AS the money cascaded from the monsters' air vents like demented fruit machines, Mr. Nation. and his attractive wife Kate were able to move house within six months.

This Christmas the toy-shops are spawning Daleks like mad. There are four-foot high "get-inside" Daleks. A hundred thousand made-in-Hong Kong Daleks. There are Dalek books, jigsaws, badges, sweets. We are about to be plugged at with a seasonal pop number, "I'm Spending Christmas With a Dalek."

Since Mr. Nation owns the word "Dalek" he'll be spending a very happy Christmas with the Daleks himself.

"I'm very bad at thinking up names," he says, "I took Dalek from the spine of an encyclopedia. I looked up on the shelf and saw one volume marked 'DAL to LEK'."

His new home, dating back to 1599, is ideal Dalek country. Thirty-five acres of overgrown parkland lap the doorsteps.' There are secret passages Mr. Nation hasn't even followed up yet.

"I went down a well in the garden," he said "and found a network of passages leading off. I'm going to set up an exploration team headed by Spike Milligan.

A RASH choice perhaps, but Mr Nation is used to the unpredictable.

As we sat in the panelled sitting room he talked about life in his own private Dalek-land.

"We are at the end of the electricity and water mains," he said. "It takes a week to fill the swimming pool and if someone in the village uses extra electricity our lights suddenly dim."

When the new radiator system was turned on while I was there the hot water gushed out of the bathroom taps instead.

Not that Mr. Nation is complaining. He has achieved his dreamhouse, Spanish vine, secret passages, an underground chapel in the grounds and all.

HE started out as a travelling salesman for his father, a Cardiff furniture manufacturer. He was a disastrous failure.

What he could do was make people laugh, in pubs.

"You ought to be on the telly,' they told him lolling around the taprooms, but careful not to spill the pints the funny Mr. Nation had bought them.

So he went to London to be a comedian. His patter was received in stolid silence at auditions.

Then one of his best friends told him, "Your material is not bad. It's you who is awful."

So Mr. Nation turned to writing funny scripts, and was soon working for the top comics in the country. He was doing a Tony Hancock series when "Dr. Who" was suggested. Mr Nation turned it down at first.

"But when the Hancock series ended, total unemployment, faced me," he said, not really believing it. "So I took on Dr. Who."

He wrote the first seven episodes in four weeks. After the second episode had been screened the Daleks had conquered millions. Kids were talking like Daleks in school playgrounds. Parents were wondering what had hit them. One father wrote to say that all the flowers in his garden had been decapitated. He then found his small son surrounded by the flower heads intoning: "I-am-a-Da-lek-and-you-are-my-en-em-ies."

Mr Nation said: "I'm all right with the kids. I get lots of letters in spidery handwriting saying 'Dr. Who is smashing.' It's the adults who kick up. But when the kids hear that their fathers have written to me, I1 get follow up letters saying. 'Don't take any notice of my Dad.'"

THE Daleks are a pretty scarey lot, though. One child I know peers at them through the back struts of a chair. Another won't' go into the room alone if Dr Who is on.

But Mr. Nation, who has no children of his own, knows what kids like: "I set out to write a thundering great thriller, the sort of thing I lapped up when I was a boy. You can't write down to kids.

"They want the lot and, anyway, they like getting the creeps as long as they are watching in the safety of their homes,"

As we were talking, the wall lights suddenly dimmed.

"Some damned fool in the village has put on the second bar of his electric fire," said Mr. Nation, with a grin.

But as I drove away from the dimly-lit mansion, I could have sworn I saw a Dalek crashing around in the under growth....