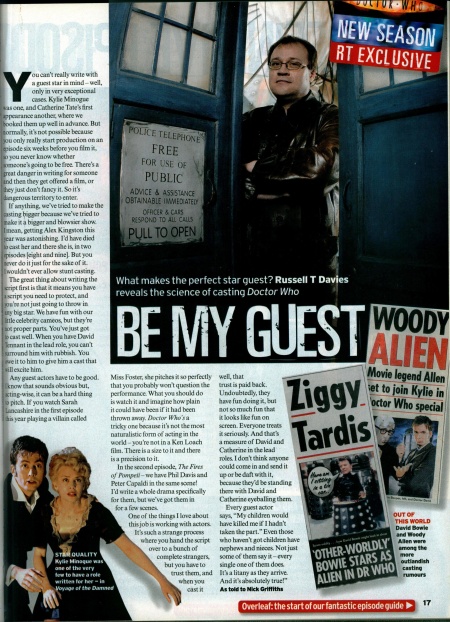 What makes the perfect star guest? Russell T Davies reveals the science of casting Doctor Who

You can't really write with a guest star in mind — well, only in very exceptional cases. Kylie Minogue was one, and Catherine Tate's first appearance another, where we booked them up well in advance. But normally, it's not possible because you only really start production on an episode six weeks before you film it, so you never know whether someone's going to be free. There's a great danger in writing for someone and then they get offered a film, or they just don't fancy it. So it's dangerous territory to enter.

If anything, we've tried to make the casting bigger because we've tried to make it a bigger and blowsier show. I mean, getting Alex Kingston this year was astonishing. I'd have died to cast her and there she is, in two episodes [eight and nine]. But you never do it just for the sake of it. I wouldn't ever allow stunt casting.

The great thing about writing the script first is that it means you have a script you need to protect, and you're not just going to throw in any big star. We have fun with our little celebrity cameos, but they're not proper parts. You've just got to cast well. When you have David Tennant in the lead role, you can't surround him with rubbish. You owe it to him to give him a cast that will excite him.

Any guest actors have to be good. I know that sounds obvious but, acting-wise, it can be a hard thing to pitch. If you watch Sarah Lancashire in the first episode this year playing a villain called Miss Foster, she pitches it so perfectly that you probably won't question the performance. What you should do is watch it and imagine how plain it could have been if it had been thrown away. Doctor Who's a tricky one because it's not the most naturalistic form of acting in the world — you're not in a Ken Loach film. There is a size to it and there is a precision to it.

In the second episode, The Fires of Pompeii — we have Phil Davis and Peter Capaldi in the same scene! I'd write a whole drama specifically for them, but we've got them in for a few scenes.

One of the things I love about this job is working with actors. It's such a strange process where you hand the script over to a bunch of complete strangers, but you have to trust them, and when you cast it well, that trust is paid back. Undoubtedly, they have fun doing it, but not so much fun that it looks like fun on screen. Everyone treats it seriously. And that's a measure of David and Catherine in the lead roles. I don't think anyone could come in and send it up or be daft with it, because they'd be standing there with David and Catherine eyeballing them.

Every guest actor says, "My children would have killed me if I hadn't taken the part." Even those who haven't got children have nephews and nieces. Not just some of them say it — every single one of them does. It's a litany as they arrive. And it's absolutely true!"

As told to Nick Griffiths