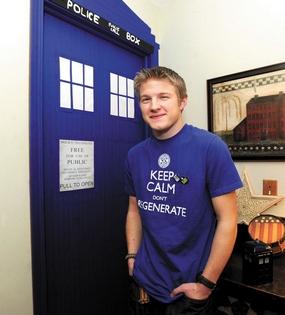 No image available. However there is a transcription available.

Do you have an image? Email us: whovian@cuttingsarchive.org

Step into Michael Long's bedroom and it's like traveling through time.

Using painter's tape, the 17-year-old Lake High School student turned the door to his room into the entry to a TARDIS - Time And Relative Dimension In Space - from the British television program "Dr. Who."

"The blue box is a symbol of the show," said Long, the son of Brian and Meghan Fowler, who live near Hartville. "(Dr. Who) uses it to go back in time to solve problems."

The show debuted on television, shown over the British Broadcasting Corporation (BBC), in 1963. The character of the good doctor has changed several times over the years.

The TARDIS itself has been changed in appearance three times, said Long.

Here are five things to know about Long and his blue TARDIS door.

1 MICHAEL LONG LIKES "DR. WHO" A LOT. "I'm a big fan of the show," said long, who that he recently went with friends to the 50th anniversary showing at an area movie theater. "It was packed."

The show is "sci-fi," said Long. "I got hooked on it this year. What I like is it has great drama. It wraps you up in it."

Long admits he is among many who are decades late in getting on the "Dr. Who" bandwagon. "Dr. Who" is being shown on cable in the United States on a rerun basis.

"I told my grandmother about it and she said, 'I remember that show!' "

2 BLUE TAPE WASN'T THE FIRST OPTION. "I wanted to paint it in the bedroom, but my Mom said no," said Long. "She said when I get a house of my own I can do whatever I want.

"So, I found some painters tape. I covered the entire door and the entire frame of the door. I used a whole roll of 2-inch tape and part of a role of 1-inch."

Long used black duct taped to provide the background for the words "POLICE PUBLIC CALL BOX," the markings on the TARDIS in the show, which the young man painted onto the tape.

No worry, Mom and Dad. It'll all peel off in time.

3 LONG'S DOOR IS VERY TARDIS-LIKE. "The way I did it is almost exactly the way it looks in the show," said Long, who estimated the door's dimensions at more than seven feet high, counting the casing, and almost three feet in width.

"The only thing it doesn't have on it is the light on the top."

The light on the top of the call box in the television show goes on when Dr. Who is in his TARDIS, traveling through time, Long explained.

Unless they allow a little rewiring down the road, Long's mother and father will just have to shout through the closed door to see if their son is in there.

Long even reproduced the official "POLICE TELEPHONE" sign on the front of his TARDIS door, found at an Internet site, printed out from his computer, and made to look its part.

"After I printed it out, I crumpled it up a little and made it look worn."

The sign says "FREE FOR USE OF PUBLIC," although Long's family likely would prefer you call before coming to their home.

"Advice & Assistance Obtainable Immediately," the sign assures, along with "Officers & Cars Respond to all Calls."

5 LONG LIKES MOST WHAT YOU CAN'T SEE. "One of the reasons I did the door is because when you open it it's bigger on the inside, which is the way it is on the show," Long explained. "The TARDIS is just a little police call box, but when the doctor opens it, on the inside is this big spaceship.

"Well, when you open my door, there is a larger room on the inside."

Caption: REPOSITORY JULIE VENNITTI Michael Long, a 17-year-old Lake High School student, turned the door to his room into the entry to a TARDIS - Time And Relative Dimension In Space - from the British television program "Dr. Who" using painters tape.