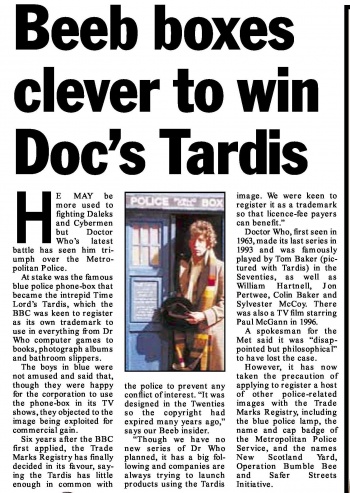 HE MAY be more used to fighting Daleks and Cybermen but Doctor Who's latest battle has seen him triumph over the Metropolitan Police.

At stake was the famous blue police phone-box that became the intrepid Time Lord's Tardis, which the BBC was keen to register as its own trademark to use in everything from Dr Who computer games to books, photograph albums and bathroom slippers.

The boys in blue were not amused and said that, though they were happy for the corporation to use the phone-box in its TV shows, they objected to the image being exploited for commercial gain.

Six years after the BBC first applied, the Trade Marks Registry has finally decided in its favour, saying the Tardis has little enough in common with

he police to prevent any conflict of interest. "It was designed in the Twenties so the copyright had expired many years ago," says our Beeb insider.

"Though we have no new series of Dr Who planned, it has a big following and companies are always trying to launch products using the Tardis image. We were keen to register it as a trademark so that licence-fee payers can benefit."

Doctor Who, first seen in 1963, made its last series in 1993 and was famously played by Tom Baker (pictured with Tardis) in the Seventies, as well as William Hartnell, Jon Pertwee, Colin Baker and Sylvester McCoy. There was also a TV film starring Paul McGann in 1996.

A spokesman for the Met said it was "disappointed but philosophical" to have lost the case.

However, it has now taken the precaution of applying to register a host of other police-related images with the Trade Marks Registry, including the blue police lamp, the name and cap badge of the Metropolitan Police Service, and the names New Scotland Yard, Operation Bumble Bee and Safer Streets Initiative.