Behind the sofa so good 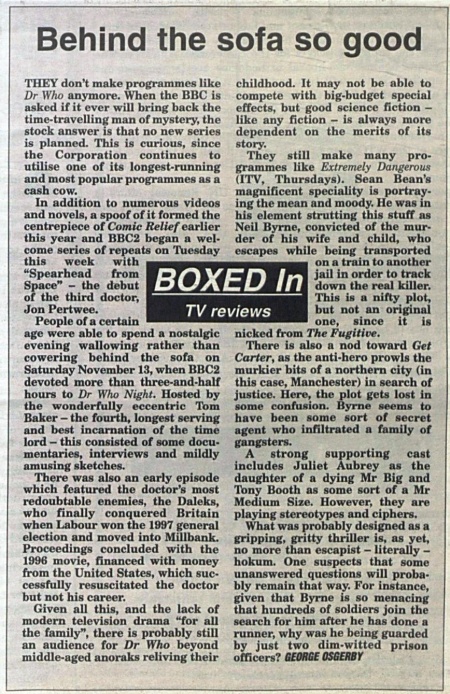 THEY don't make programmes like Dr Who anymore. When the BBC is asked if it ever will bring back the time-travelling man of mystery, the stock answer is that no new series is planned. This is curious, since the Corporation continues to utilise one of its longest-running and most popular programmes as a cash cow.

In addition to numerous videos and novels, a spoof of it formed the centrepiece of Comic Relief earlier this year and BBC2 began a welcome series of repeats on Tuesday this week with "Spearhead from Space" - the debut of the third doctor, Jon Pertwee.

People of a certain age were able to spend a nostalgic evening wallowing rather than cowering behind the sofa on Saturday November 13, when BBC2 devoted more than three-and-half hours to Dr Who Night. Hosted by the wonderfully eccentric Tom Baker - the fourth, longest serving and best incarnation of the time lord - this consisted of some documentaries, interviews and mildly amusing sketches.

There was also an early episode which featured the doctor's most redoubtable enemies, the Daleks, who finally conquered Britain when Labour won the 1997 general election and moved into Millbank. Proceedings concluded with the 1996 movie, financed with money from the United States, which successfully resuscitated the doctor but not his career.

Given all this, and the lack of modem television drama "for all the family", there is probably still an audience for Dr Who beyond middle-aged anoraks reliving their childhood. It may not be able to compete with big-budget special effects, but good science fiction like any fiction - is always more dependent on the merits of its story.