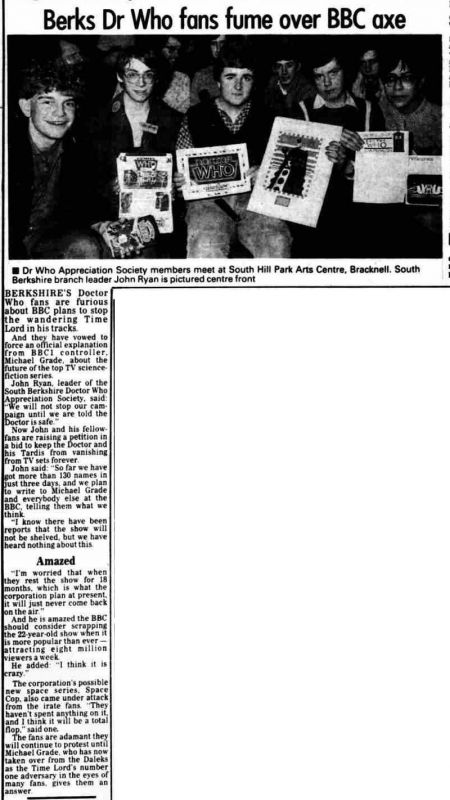 BERKSHIRE'S Doctor Who fans are furious about BBC plans to stop the wandering Time Lord in his tracks.

And they have vowed to force an official explanation from BBC1 controller, Michael Grade, about the future of the top TV science-fiction series.

John Ryan, leader of the South Berkshire Doctor Who Appreciation Society, said: "We will not stop our campaign until we are told the Doctor is safe."

Now John and his fellow-fans are raising a petition in a bid to keep the Doctor and his Tardis from vanishing from TV sets forever.

John said: "So far we have got more than 130 names in just three days, and we plan to write to Michael Grade and everybody else at the BBC, telling them what we think.

"I know there have been reports that the show will not be shelved, but we have heard nothing about this.

"I'm worried that when they rest the show for 18 months, which is what the corporation plan at present, it will just never come back on the air."

And he is amazed the BBC should consider scrapping the 22-year-old show when it is more popular than ever, attracting eight million viewers a week.

The corporation's possible new space series, Space Cop, also came under attack from the irate fans. They haven't spent anything on it, and I think it will be a total flop," said one.

The fans are adamant they will continue to protest until Michael Grade, who has now taken over from the Daleks as the Time Lord's number one adversary in the eyes of many fans, gives them an answer.