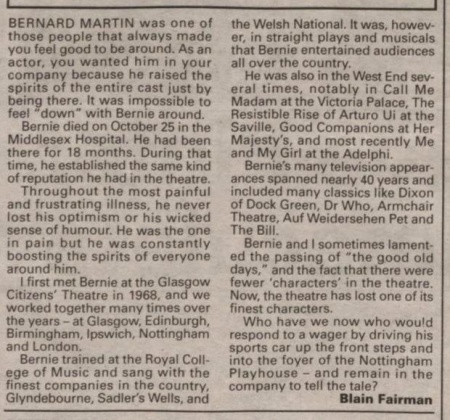 BERNARD MARTIN was one of those people that always made you feel good to be around. As an actor, you wanted him in your company because he raised the spirits of the entire cast just by being there. It was impossible to feel "down" with Bernie around.

Bernie died on October 25 in the Middlesex Hospital. He had been there for 18 months. During that time, he established the same kind of reputation he had in the theatre.

Throughout the most painful and frustrating illness, he never lost his optimism or his wicked sense of humour. He was the one in pain but he was constantly boosting the spirits of everyone around him.

I first met Bernie at the Glasgow Citizens' Theatre in 1968, and we worked together many times over the years - at Glasgow. Edinburgh, Birmingham, Ipswich, Nottingham and London.

Bernie trained at the Royal College of Music and sang with the finest companies in the country, Glyndebourne, Sadler's Wells, and the Welsh National. It was, however, in straight plays and musicals that Bernie entertained audiences all over the country.

He was also in the West End several times, notably in Call Me Madam at the Victoria Palace, The Resistible Rise of Arturo Ui at the Saville, Good Companions at Her Majesty's, and most recently Me and My Girl at the Adeiphi.

Bernie's many television appearances spanned nearly 40 years and included many classics like Dixon of Dock Green, Dr Who, Armchair Theatre, Auf Weidersehen Pet and The Bill.

Bernie and I sometimes lamented the passing of "the good old days," and the fact that there were fewer 'characters' in the theatre. Now, the theatre has lost one of its finest characters.

Who have we now who would respond to a wager by driving his sports car up the front steps and into the foyer of the Nottingham Playhouse - and remain in the company to tell the tale?