Bertie Bassett Takes On Doctor Who 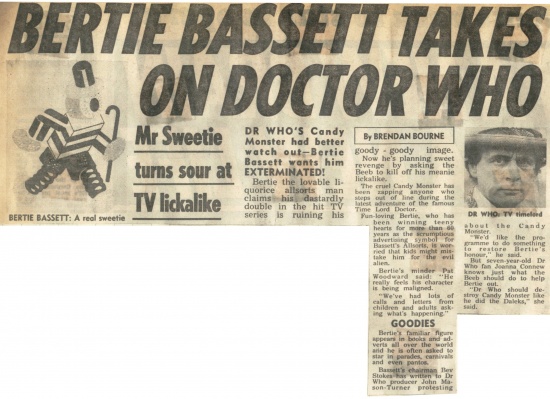 Now he's planning sweet revenge by asking the Beeb to kill off his meanie lickalike.

The cruel Candy Monster has been zapping anyone who steps out of line during the latest adventure of the famous Time Lord Doctor.

Fun-loving Bertie, who has been winning teeny hearts for more than 60 years as the scrumptious advertising symbol for Bassett's Allsorts, is worried that kids might mistake him for the evil alien.

Bertie's minder Pat Woodward said: "He really feels his character is being maligned.

"We've had lots of calls and letters from children and adults asking what's happening."

Bertie's familiar figure appears in books and adverts all over the world and he is often asked to star in parades, carnivals and even pantos.

Bassett's chairman Bev Stokes has written to Dr Who producer John Mason-Turner protesting about the Candy Monster. "We'd like the programme to do something to restore Bertie's honour," he said.

But seven-year-old Dr Who fan Joanna Connew knows just what the Beeb should do to help Bertie out.

"Dr Who should destroy Candy Monster like he did the Daleks," she said.