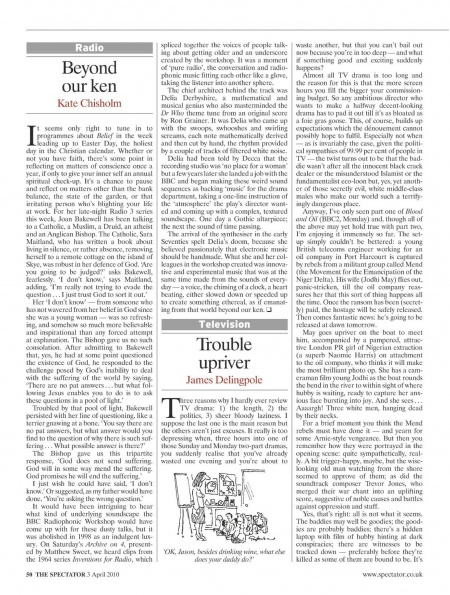 It seems only right to tune in to programmes about Belief in the week leading up to Easter Day, the holiest day in the Christian calendar. Whether or not you have faith, there's some point in reflecting on matters of conscience once a year, if only to give your inner self an annual spiritual check-up. It's a chance to pause and reflect on matters other than the bank balance, the state of the garden, or that irritating person who's blighting your life at work. For her late-night Radio 3 series this week, Joan Bakewell has been talking to a Catholic, a Muslim, a Druid, an atheist and an Anglican Bishop. The Catholic, Sara Maitland, who has written a book about living in silence, or rather absence, removing herself to a remote cottage on the island of Skye, was robust in her defence of God. 'Are you going to be judged?' asks Bakewell, fearlessly. 'I don't know, ' says Maitland, adding, 'I'm really not trying to evade the question ... I just trust God to sort it out.'

Her 'I don't know' - from someone who has not wavered from her belief in God since she was a young woman - was so refreshing, and somehow so much more believable and inspirational than any forced attempt at explanation. The Bishop gave us no such consolation. After admitting to Bakewell that, yes, he had at some point questioned the existence of God, he responded to the challenge posed by God's inability to deal with the suffering of the world by saying, 'There are no pat answers ... but what following Jesus enables you to do is to ask these questions in a pool of light.'

Troubled by that pool of light, Bakewell persisted with her line of questioning, like a terrier gnawing at a bone. 'You say there are no pat answers, but what answer would you find to the question of why there is such suffering ...What possible answer is there?'

The Bishop gave us this tripartite response, 'God does not send suffering.

God will in some way mend the suffering.

God promises he will end the suffering.'

I just wish he could have said, 'I don't know.' Or suggested, as my father would have done, 'You're asking the wrong question.'

It would have been intriguing to hear what kind of underlying soundscape the BBC Radiophonic Workshop would have come up with for these dusty talks, but it was abolished in 1998 as an indulgent luxury. On Saturday's Archive on 4, presented by Matthew Sweet, we heard clips from the 1964 series Inventions for Radio, which spliced together the voices of people talking about getting older and an underscore created by the workshop. It was a moment of 'pure radio', the conversation and radiophonic music fitting each other like a glove, taking the listener into another sphere.

The chief architect behind the track was Delia Derbyshire, a mathematical and musical genius who also masterminded the Dr Who theme tune from an original score by Ron Grainer. It was Delia who came up with the swoops, swhooshes and swirling screams, each note mathematically derived and then cut by hand, the rhythm provided by a couple of tracks of filtered white noise.

Delia had been told by Decca that the recording studio was 'no place for a woman' but a few years later she landed a job with the BBC and began making these weird sound sequences as backing 'music' for the drama department, taking a one-line instruction of the 'atmosphere' the play's director wanted and coming up with a complex, textured soundscape. One day a Gothic altarpiece; the next the sound of time passing.

The arrival of the synthesiser in the early Seventies spelt Delia's doom, because she believed passionately that electronic music should be handmade. What she and her colleagues in the workshop created was innovative and experimental music that was at the same time made from the sounds of everyday - a voice, the chiming of a clock, a heart beating, either slowed down or speeded up to create something ethereal, as if emanating from that world beyond our ken.