Bigger on the Inside 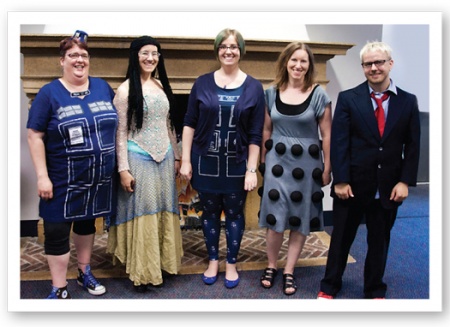 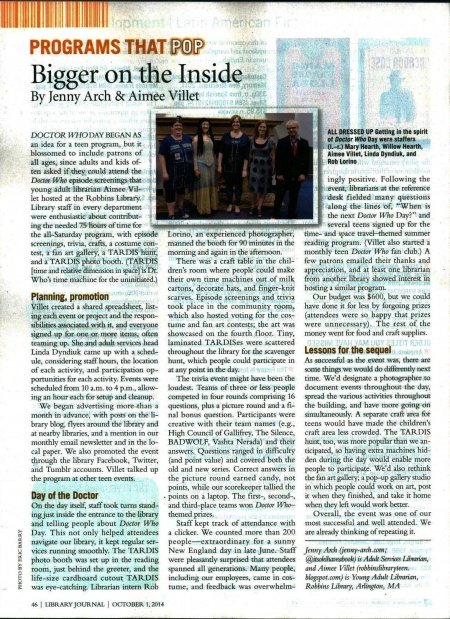 Doctor Who Day Began As an idea for a teen program, but it blossomed to include patrons of all ages, since adults and kids often asked if they could attend the Doctor Who episode screenings that young adult librarian Aimee Villet hosted at the Robbins Library. Library staff in every department were enthusiastic about contributing the needed 75 hours of time for the all-Saturday program, with episode screenings, trivia, crafts, a costume contest, a fan art gallery, a TARDIS hunt, and a TARDIS photo booth. (TARDIS [time and relative dimension in space] is Dr. Who's time machine for the uninitiated.)

Villet created a shared spreadsheet, listing each event or project and the responsibilities associated with it, and everyone signed up for one or more items, often teaming up. She and adult services head Linda Dyndiuk came up with a schedule, considering staff hours, the location of each activity, and participation opportunities for each activity. Events were scheduled from 10 a.m. to 4 p.m., allowing an hour each for setup and cleanup.

We began advertising more than a month in advance, with posts on the library blog, flyers around the library and at nearby libraries, and a mention in our monthly email newsletter and in the local paper. We also promoted the event through the library Facebook, Twitter, and Tumblr accounts. Villet talked up the program at other teen events.

Day of the Doctor

On the day itself, staff took turns standing just inside the entrance to the library and telling people about Doctor Who Day. This not only helped attendees navigate our library, it kept regular services running smoothly. The TARDIS photo booth was set up in the reading room, just behind the greeter, and the life-size cardboard cutout TARDIS was eye-catching. Librarian intern Rob Lorino, an experienced photographer, manned the booth for 90 minutes in the morning and again in the afternoon.

There was a craft table in the children's room where people could make their own time machines out of milk cartons, decorate hats, and finger-knit scarves. Episode screenings and trivia took place in the community room, which also hosted voting for the costume and fan art contests; the art was showcased on the fourth floor. Tiny, laminated TARDISes were scattered throughout the library for the scavenger hunt, which people could participate in at any point in the day.

The trivia event might have been the loudest. Teams of three or less people competed in four rounds comprising 16 questions, plus a picture round and a final bonus question. Participants were creative with their team names (e.g., High Council of Gallifrey, The Silence, BADWOLF, Vashta Nerada) and their answers. Questions ranged in difficulty (and point value) and covered both the old and new series. Correct answers in the picture round earned candy, not points, while our scorekeeper tallied the points on a laptop. The first-, second-, and third-place teams won Doctor Who--themed prizes.

Staff kept track of attendance with a clicker. We counted more than 200 people--extraordinary for a sunny New England day in late June. Staff were pleasantly surprised that attendees spanned all generations. Many people, including our employees, came in costume, and feedback was overwhelmingly positive. Following the event, librarians at the reference desk fielded many questions along the lines of, "When is the next Doctor Who Day?" and several teens signed up for the timeand space travel--themed summer reading program. (Villet also started a monthly teen Doctor Who fan club.) A few patrons emailed their thanks and appreciation, and at least one librarian from another library showed interest in hosting a similar program.

Our budget was $600, but we could have done it for less by forgoing prizes (attendees were so happy that prizes were unnecessary). The rest of the money went for food and craft supplies.

Lessons for the sequel

As successful as the event was, there are some things we would do differently next time. We'd designate a photographer to document events throughout the day, spread the various activities throughout the building, and have more going on simultaneously. A separate craft area for teens would have made the children's craft area less crowded. The TARDIS hunt, too, was more popular than we anticipated, so having extra machines hidden during the day would enable more people to participate. We'd also rethink the fan art gallery; a pop-up gallery studio in which people could work on art, post it when they finished, and take it home when they left would work better.

Overall, the event was one of our most successful and well attended. We are already thinking of repeating it.

Caption: ALL DRESSED UP: Getting in the spirit of Doctor Who were staffers (l.-r.) Mary Hearth, Willow Hearth, Aimee Villet, Linda Dyndiuk, and Rob Lorino