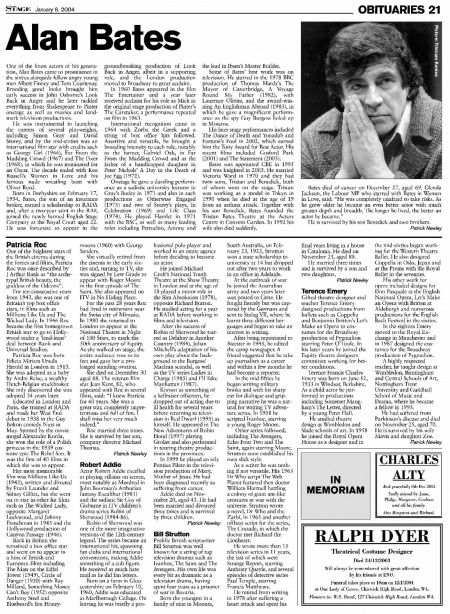 Prolific British scriptwriter Bill Strutton was well known for a string of top television dramas such as Ivanhoe, The Saint and The Avengers. His own life was every bit as dramatic as a television drama, having spent four years as a prisoner of war in Bavaria.

Born the youngest in a family of nine in Moonta, South Australia, on February 23, 1923, Strutton won a state scholarship to university at 14 but dropped out after two years to work in an office in Adelaide.

At the outbreak of war he joined the Australian army and two years later was posted to Crete. He fought fiercely but was captured by the Germans and sent to Stalag VII, where he learnt three different languages and began to take an interest in writing.

After being repatriated to Bicester in 1945, he edited the camp newspaper. A friend suggested that he take up journalism as a career and within a few months he had become a reporter.

In the mid-fifties he began writing military books and with his sharp ear for dialogue and gripping narrative he was a natural for writing TV adventure series. In 1958 he scripted Ivanhoe, starring a young Roger Moore.

Other series followed, including The Avengers, Echo Four Two and The Saint, again starring Moore. Strutton soon established his own slick style.

As a writer he was nothing if not versatile. His 1963 Dr Who script The Web Planet featured then doctor William Harmell battling a colony of giant ant-like creatures at war with the universe. Strutton wrote a novel, Dr Who and the Zarbi, in 1965 and another offbeat script for the series, The Crusade, in which the doctor met Richard the Lionheart.

He wrote more than 15 television series in 11 years, the last of which were Strange Report, starring Anthony Quayle, and several episodes of detective series Paul Temple, starring Francis Matthews.

He retired from writing in 1978 after suffering a heart attack and spent his final years living in a house in Catalonia. He died on November 23, aged 80.

He married three times and is survived by a son and two daughters.