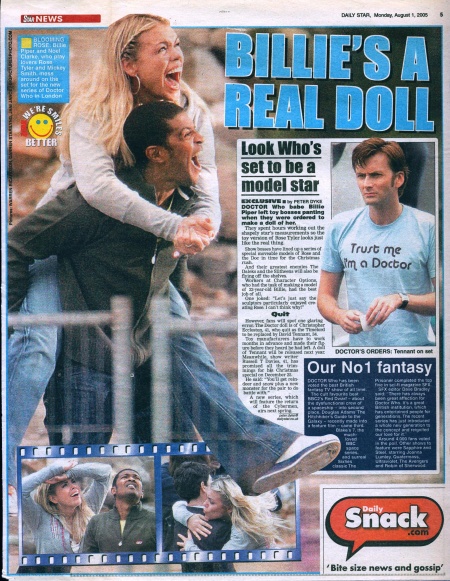 Look Who's set to be a model star

DOCTOR Who babe Billie Piper left toy bosses panting when they were ordered to make as doll of her.

They spent hours working out the shapely star's measurements so the toy version of Rose Tyler looks just like the real thing.

Show bosses have lined up a series of special moveable models of Rose and the Doc in time for the Christmas rush.

And their greatest enemies The Daleks and the Slitheens will also be flying off the shelves.

Workers at Character Options, who had the task of making a model of 22-year-old Billie, had the best job of all.

However, fans will spot one glaring error. The Doctor doll is of Christopher Eccleston, 41, who quit as the Timelord to be replaced by David Tennant, 34. Toy manufacturers have to work months in advance and made their figure before they heard he had left. A doll of Tennant will be released next year. Meanwhile, show writer Russell T Davies, 41, has promised all the trimmings for his Christmas special on December 25.

He said: "You'll get reindeer and snow plus a new monster for the pair to do battle with."

A new series, which will feature the return of the Cybermen, airs next spring.

Caption: BLOOMING ROSE: Billie Piper and Noel Clarke, who play lovers Rose Tyler and Mickey Smith, mess around on the set for the new series of Doctor.

DOCTOR Who has been voted the best British fantasy TV show of all time.

The cult favourite beat BBC2's Red Dwarf - about the dysfunctional crew of a spaceship - into second place. Douglas Adams The Hitchhiker's Guide to the Galaxy - recently made into a feature film - came third. Blake's 7, the much-loved BBC space series, and surreal Sixties classic The Prisoner completed the top five in sci-fi magazine SFX.

SFX editor Dave Bradley said: "There has always been great affection for Doctor Who. It's a great British institution, which has entertained people for generations. The recent series has just introduced a whole new generation to the concept and reignited our love for it."

Around 4.000 fans voted in the poll. Other shows to feature were Sapphire and Steel, starring Joanna Lumley. Quatermass, Ultraviolet, The Avengers and Robin of Sherwood.