Billie's a waste of time 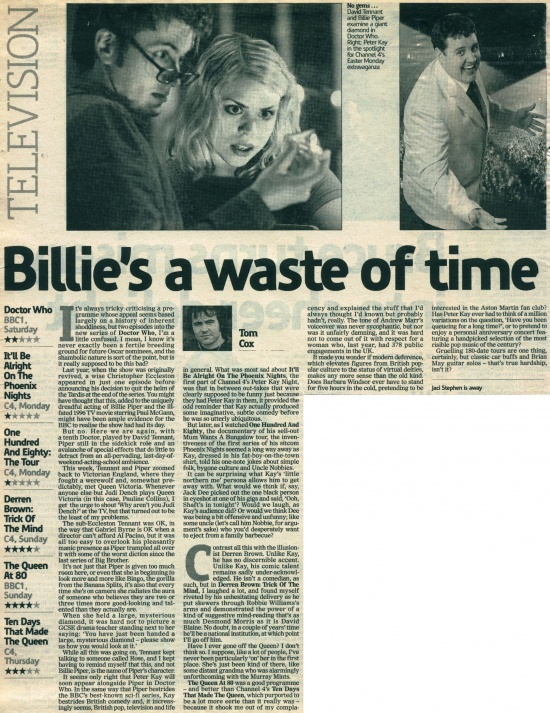 It's always tricky criticising a programme whose appeal seems based largely on a history of inherent shoddiness, but two episodes into the new series of Doctor Who, I'm a little confused. I mean, I know it's never exactly been a fertile breeding ground for future Oscar nominees, and the shambolic nature is sort of the point, but is it really supposed to be this bad?

Last year, when the show was originally revived, a wise Christopher Eccleston appeared in just one episode before announcing his decision to quit the helm of the Tardis at the end of the series. You might have thought that this, added to the uniquely dreadful acting of Billie Piper and the ill-fated 1996 TV movie starring Paul McGann, might have been ample evidence for the BBC to realise the show had had its day. But no. Here we are again, with a tenth Doctor, played by David Tennant, Piper still in the sidekick role and an avalanche of special effects that do little to detract from an all-pervading, last-day-of-weekend-acting-school ambience.

This week, Tennant and Piper zoomed back to Victorian England, where they fought a werewolf and, somewhat predictably, met Queen Victoria. Whenever anyone else but Judi Dench plays Queen Victoria (in this case, Pauline Collins), I get the urge to shout 'Why aren't you Judi Dench?' at the TV, but that turned out to be the least of my problems.

The sub-Eccleston Tennant was OK, in the way that Gabriel Byrne is OK when a director can't afford Al Pacino, but it was all too easy to overlook his pleasantly manic presence as Piper trampled all over it with some of the worst diction since the last series of Big Brother.

It's not just that Piper is given too much room here, or even that she is beginning to look more and more like Bingo, the gorilla from the Banana Splits, it's also that every time she's on camera she radiates the aura of someone who believes they are two or three times more good-looking and talented than they actually are.

While all this was going on, Tennant kept talking to someone called Rose, and I kept having to remind myself that this, and not Billie Piper, is the name of Piper's character. It seems only right that Peter Kay will soon appear alongside Piper in Doctor Who. In the same way that Piper bestrides the BBC's best-known sci-fi series, Kay bestrides British comedy and, it increasingly seems, British pop, television and life in general. What was most sad about It'll Be Alright On The Phoenix Nights, the first part of Channel 4's Peter Kay Night, was that in between out-takes that were clearly supposed to be funny just because they had Peter Kay in them, it provided the odd reminder that Kay actually produced some imaginative, subtle comedy before he was so utterly ubiquitous.

Caption: No gems ... David Tennant and Billie Piper examine a giant diamond in Doctor Who.