Billie: It's Ta-ta to the Tardis 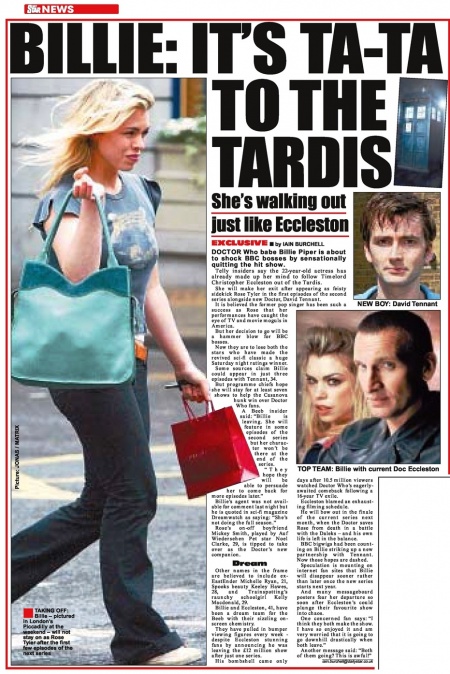 DOCTOR Who babe Billie Piper is about to shock BBC bosses by sensationally quitting the hit show.

Telly insiders say the 22-year-old actress has already made up her mind to follow Timelord Christopher Eccleston out of the Tardis.

She will make her exit after appearing as feisty sidekick Rose Tyler in the first episodes of the second series alongside new Doctor, David Tennant.

It is believed the former pop singer has been such a success as Rose that her performances have caught the eye of TV and movie moguls in America.

But her decision to go will be a hammer blow for BBC bosses.

Now they are to lose both the stars who have made the revived sci-fi classic a huge Saturday night ratings winner. Some sources claim Billie could appear in just three episodes with Tennant, 34. But programme chiefs hope she will stay for at least seven shows to help the Casanova hunk win over Doctor Who fans.

A Beeb insider said: "Billie is leaving. She will feature in some episodes of the second series but her character won't be there at the end of the series.

"They hope they will be able to persuade her to come back for more episodes later."

Billie's agent was not available for comment last night but he is quoted in sci-fi magazine Dreamwatch as saying: "She's not doing the full season." Rose's on-off boyfriend Mickey Smith, played by Auf Wiedersehen Pet star Noel Clarke, 29, is tipped to take over as the Doctor's new companion.

Other names in the frame are believed to include ex-EastEnder Michelle Ryan, 21, Spooks beauty Keeley Hawes, 28, and Trainspotting's raunchy schoolgirl Kelly Macdonald, 29.

Billie and Eccleston, 41, have been a dream team for the Beeb with their sizzling onscreen chemistry.

They have pulled in bumper viewing figures every week despite Eccleston stunning fans by announcing he was leaving the £12 million show after just one series.

He will bow out in the finale of the current series next month, when the Doctor saves Rose from death in a battle with the Daleks — and his own life is left in the balance.

BBC bigwigs had been counting on Billie striking up a new partnership with Tennant. Now those hopes are dashed.

Speculation is mounting on inter net fan sites that Billie will disappear sooner rather than later once the new series starts next year.

And many messageboard posters fear her departure so soon after Eccleston's could plunge their favourite show into chaos.

One concerned fan says: "I think they both make the show. I have so enjoyed it and am very worried that it is going to go downhill drastically when both leave."

Another message said: "Both of them going? This is awful!"

TAKING OFF: Billie — pictured in London's Piccadilly at the weekend — will not stay on as Rose Tyler after the first few episodes of the next series