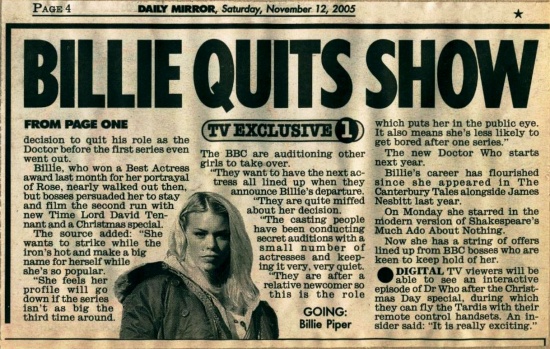 decision to quit his role as the Doctor before the first series even went out.

Billie, who won a Best Actress award last month for her portrayal of Rose, nearly walked out then, but bosses persuaded her to stay and film the second run with new Time Lord David Tennant and a Christmas special.

The source added: "She wants to strike while the iron's hot and make a big name for herself while she's so popular.

"She feels her profile will go down if the series isn't as big the third time around.

The BBC are auditioning other girls to take over.

"They want to have the next actress all lined up when they announce Billie's departure. "They are quite miffed about her decision.

"The casting people have been conducting secret auditions with a small number of actresses and keeping it very, very quiet. "They are after a relative newcomer so this is the role which puts her in the public eye. It also means she's less likely to get bored after one series.

The new Doctor Who starts next year.

Billie's career has flourished since she appeared in The Canterbury Tales alongside James Nesbitt last year.

On Monday she starred in the modern version of Shakespeare's Much Ado About Nothing.

Now she has a string of offers lined up from BBC bosses who are keen to keep hold of her.

AI DIGITAL TV viewers will be W able to see an interactive episode of Dr Who after the Christmas Day special, during which they can fly the Tardis with their remote control handsets. An insider said: "It is really exciting."