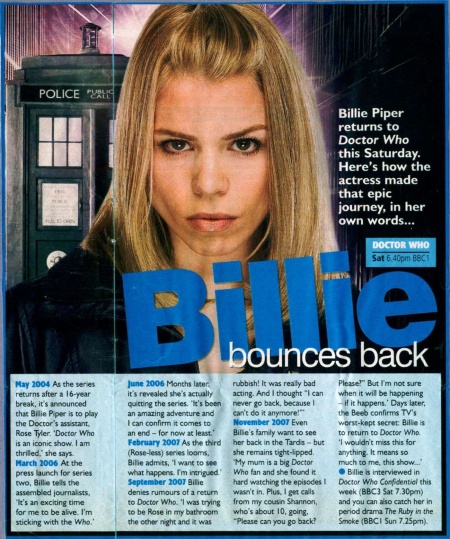 Billie Piper returns to Doctor Who this Saturday. Here's how the actress made that epic journey, in her own words...

May 2004 As the series returns after a I 6-year break, it's announced that Billie Piper is to play the Doctor's assistant, Rose Tyler. 'Doctor Who is an iconic show. I am thrilled,' she says.

March 2006 At the press launch for series two, Billie tells the assembled journalists, 'It's an exciting time for me to be alive. I'm sticking with the Who.'

June 2006 Months later, it's revealed she's actually quitting the series. 'It's been an amazing adventure and I can confirm it comes to an end - for now at least.'

September 2007 Billie denies rumours of a return to Doctor Who. 'I was trying to be Rose in my bathroom the other night and it was rubbish! It was really bad acting. And I thought "I can never go back, because I can't do it anymore!".

November 2007 Even Billie's family want to see her back in the Tardis - but she remains tight-lipped. 'My mum is a big Doctor Who fan and she found it hard watching the episodes I wasn't in. Plus, I get calls from my cousin Shannon, who's about 10, going, "Please can you go back?

Please?" But I'm not sure when it will be happening - if it happens.' Days later, the Beeb confirms TV's worst-kept secret: Billie is to return to Doctor Who. 'I wouldn't miss this for anything. It means so much to me, this show...'

Billie is interviewed in Doctor Who Confidential this week (BBC3 Sat 7.30pm) and you can also catch her in period drama The Ruby in the Smoke (BBC I Sun 7.25pm).