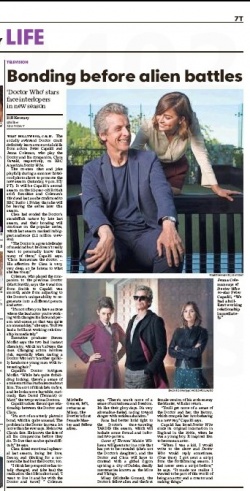 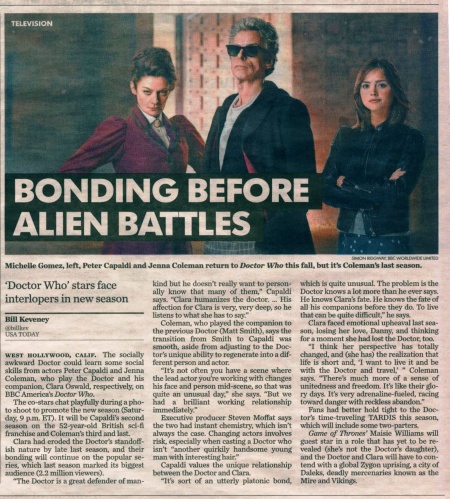 WEST HOLLYWOOD, CALIF. The socially awkward Doctor could learn some social skills from actors Peter Capaldi and Jenna Coleman, who play the Doctor and his companion, Clara Oswald, respectively, on BBC America's Doctor Who.

The co-stars chat playfully during a photo shoot to promote the new season (Saturday, 9 p.m. ET). It will be Capaldi's second season on the 52-year-old British sci-fi franchise and Coleman's third and last.

Clara had eroded the Doctor's standoffish nature by late last season, and their bonding will continue on the popular series, which last season marked its biggest audience (2.2 million viewers).

"The Doctor is a great defender of mankind but he doesn't really want to personally know that many of them," Capaldi says. "Clara humanizes the doctor. ... His affection for Clara is very, very deep, so he listens to what she has to say."

Coleman, who played the companion to the previous Doctor (Matt Smith), says the transition from Smith to Capaldi was smooth, aside from adjusting to the Doctor's unique ability to regenerate into a different person and actor.

"It's not often you have a scene where the lead actor you're working with changes his face and person mid-scene, so that was quite an unusual day," she says. "But we had a brilliant working relationship immediately."

Capaldi values the unique relationship between the Doctor and Clara

"It's sort of an utterly platonic bond, which is quite unusual. The problem is the Doctor knows a lot more than he ever says He knows Clara's fate. He knows the fate of all his companions before they do. To live that can be quite difficult," he says.

Clara faced emotional upheaval last season, losing her love, Danny, and thinking for a moment she had lost the Doctor, too.

"I think her perspective has totally changed, and (she has) the realization that life is short and, 'I want to live it and be with the Doctor and travel,' " Coleman says. "There's much more of a sense of unitedness and freedom. It's like their glory days. It's very adrenaline-fueled, racing toward danger with reckless abandon."

Fans had better hold tight to the Doctor's time-traveling TARDIS this season which will include some two-parters.

Game of Thrones' Maisie Williams will guest star in a role that has yet to be revealed (she's not the Doctor's daughter) and the Doctor and Clara will have to contend with a global Zygon uprising, a city of Daleks, deadly mercenaries known as the Mire and Vikings.

Caption: Michelle Gomez, left, Peter Capaldi and Jenna Coleman return to Doctor Who this fall, but it's Coleman's last season.