Boo Who (The Sun) 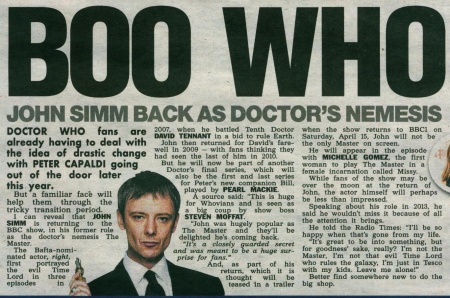 JOHN SIMM BACK AS DOCTOR'S NEMESIS

DOCTOR WHO fans are already having to deal with the idea of drastic change with PETER CAPALDI going out of the door later this year.

But a familiar face will help them through the tricky transition period.

I can reveal that JOHN SIMM is returning to the BBC show, in his former role as the doctor's nemesis The Master.

The Bafta-nominated actor, right, first portrayed the evil Time Lord in three episodes in 2007, when he battled Tenth Doctor DAVID TENNANT in a bid to rule Earth.

John then returned for David's farewell in 2009 — with fans thinking they had seen the last of him in 2010.

But he will now be part of another Doctor's final series, which will also be the first and last series for Peter's new companion Bill, played by PEARL MACKIE.

A source said: "This is huge for Whovians and is seen as a big coup by show boss STEVEN MOFFAT.

"John was hugely popular as The Master and they'll be delighted he's coming back.

"It's a closely guarded secret and was meant to be a huge surprise for fans."

And, as part of his return, which it is thought will be teased in a trailer when the show returns to BBC1 on Saturday, April 15, John will not be the only Master on screen.

He will appear in the episode with MICHELLE GOMEZ, the first woman to play The Master in a female incarnation called Missy.

While fans of the show may be over the moon at the return of John, the actor himself will perhaps be less than impressed.

Speaking about his role in 2013, he said he wouldn't miss it because of all the attention it brings.

He told the Radio Times: "I'll be so happy when that's gone from my life.

"It's great to be into something, but for goodness' sake, really? I'm not the Master, I'm not that evil Time Lord who rules the galaxy, I'm just in Tesco with my kids. Leave me alone!"

Better find somewhere new to do the big shop.