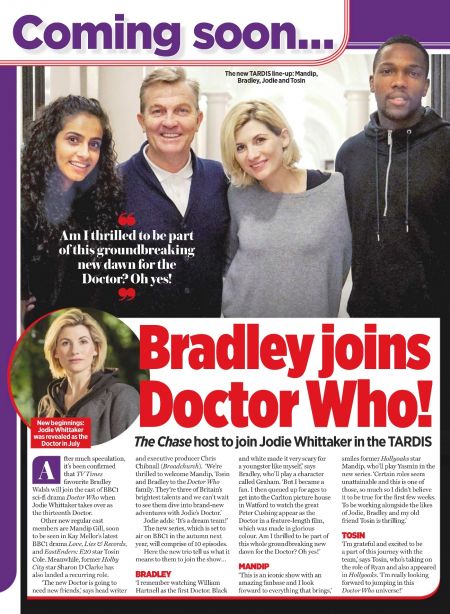 The Chase host to join Jodie Whittaker in the TARDIS

After much speculation, it's been confirmed that TV Times favourite Bradley Walsh will join the cast of BBC1 sci-fi drama Doctor Who when Jodie Whittaker takes over as the thirteenth Doctor.

'The new Doctor is going to need new friends,' says head writer and executive producer Chris Chibnall (Broadchurch). 'We're thrilled to welcome Mandip, Tosin and Bradley to the Doctor Who family. They're three of Britain's brightest talents and we can't wait to see them dive into brand-new adventures with Jodie's Doctor.'

The new series, which is set to air on BBC1 in the autumn next year, will comprise of 10 episodes.

Here the new trio tell us what it means to them to join the show...

'I remember watching William Hartnell as the first Doctor. Black and white made it very scary for a youngster like myself,' says Bradley, who'll play a character called Graham. 'But I became a fan. I then queued up for ages to get into the Carlton picture house in Watford to watch the great Peter Cushing appear as the Doctor in a feature-length film, which was made in glorious colour. Am I thrilled to be part of this whole groundbreaking new dawn for the Doctor? Oh yes!'

'This is an iconic show with an amazing fanbase and I look forward to everything that brings,' smiles former Hollyoaks star Mandip, who'll play Yasmin in the new series. 'Certain roles seem unattainable and this is one of those, so much so I didn't believe it to be true for the first few weeks. To be working alongside the likes of Jodie, Bradley and my old friend Tosin is thrilling.

'I'm grateful and excited to be a part of this journey with the team, says Tosin, who's taking on the role of Ryan and also appeared in Hollyoaks. 'I'm really looking forward to jumping in this Doctor Who universe!'

Caption: New beginnings: Jodie Whittaker was revealed as the Doctor in July