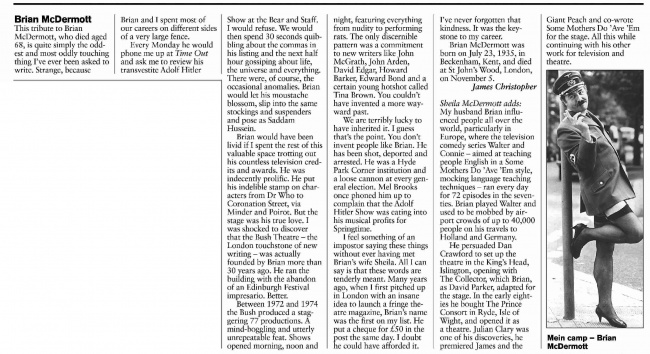 This tribute to Brian McDermott, who died aged 68, is quite simply the oddest and most oddly touching thing I've ever been asked to write. Strange, because

Brian and I spent most of our careers on different sides of a very large fence.

Every Monday he would phone me up at Time Out and ask me to review his transvestite Adolf Hitler Show at the Bear and Staff. I would refuse. We would then spend 30 seconds quibbling about the commas in his listing and the next half hour gossiping about life, the universe and everything. There were, of course, the occasional anomalies. Brian would let his moustache blossom, slip into the same stockings and suspenders and pose as Saddam Hussein.

Brian would have been livid if I spent the rest of this valuable space trotting out his countless television credits and awards. He was indecently prolific. He put his indelible stamp on characters from Dr Who to Coronation Street, via Minder and Poirot. But the stage was his true love. I was shocked to discover that the Bush Theatre — the London touchstone of new writing — was actually founded by Brian more than 30 years ago. He ran the building with the abandon of an Edinburgh Festival impresario. Better.

Between 1972 and 1974 the Bush produced a staggering 77 productions. A mind-boggling and utterly unrepeatable feat. Shows opened morning, noon and night, featuring everything from nudity to performing rats. The only discernible pattern was a commitment to new writers like John McGrath, John Arden, David Edgar, Howard Barker, Edward Bond and a certain young hotshot called Tina Brown. You couldn't have invented a more wayward past.

We are terribly lucky to have inherited it. I guess that's the point. You don't invent people like Brian. He has been shot, deported and arrested. He was a Hyde Park Corner institution and a loose cannon at every general election. Mel Brooks once phoned him up to complain that the Adolf Hitler Show was eating into his musical profits for Springtime.

I feel something of an impostor saying these things without ever having met Brian's wife Sheila. All I can say is that these words are tenderly meant. Many years ago, when I first pitched up in London with an insane idea to launch a fringe theatre magazine, Brian's name was the first on my list. He put a cheque for £50 in the post the same day. I doubt he could have afforded it. I've never forgotten that kindness. It was the keystone to my career.

Sheila McDermott adds: My husband Brian influenced people all over the world, particularly in Europe, where the television comedy series Walter and Connie — aimed at teaching people English in a Some Mothers Do 'Ave 'Em style, mocking language teaching techniques — ran every day for 72 episodes in the seventies. Brian played Walter and used to be mobbed by airport crowds of up to 40,000 people on his travels to Holland and Germany.

He persuaded Dan Crawford to set up the theatre in the King's Head, Islington, opening with The Collecto; which Brian, as David Parker, adapted for the stage. In the early eighties he bought The Prince Consort in Ryde, Isle of Wight, and opened it as a theatre. Julian Clary was one of his discoveries, he premiered James and the Giant Peach and co-wrote Some Mothers Do 'Ave 'Em for the stage. All this while continuing with his other work for television and theatre.