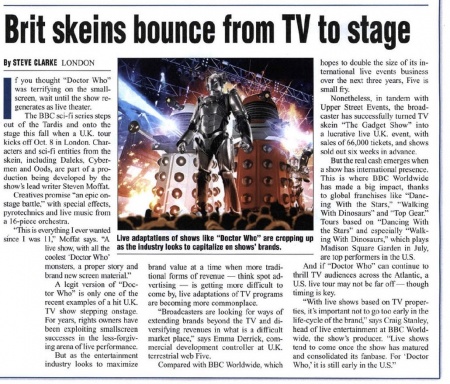 If you thought "Doctor Who" was terrifying on the small-screen, wait until the show regenerates as live theater.

The BBC sci-fi series steps out of the Tardis and onto the stage this fall when a U.K. tour kicks off Oct. 8 in London. Characters and sci-fi entities from the skein, including Daleks, Cybermen and Oods, are part of a production being developed by the show's lead writer Steven Moffat.

"This is everything I ever wanted since I was 11," Moffat says. "A live show, with all the coolest 'Doctor Who' monsters, a proper story and brand new screen material."

A legit version of "Doctor Who" is only one of the recent examples of a hit U.K. TV show stepping onstage. For years, rights owners have been exploiting small-screen successes in the less-forgiving arena of live performance.

But as the entertainment industry looks to maximize brand value at a time when more traditional forms of revenue--think spot advertising--is getting more difficult to come by, live adaptations of TV programs are becoming more commonplace.

"Broadcasters are looking for ways of extending brands beyond the TV and diversifying revenues in what is a difficult market place," says Emma Derrick, commercial development controller at U.K. terrestrial web Five.

Compared with BBC Worldwide, which hopes to double the size of its international live events business over the next three years, Five is small fry.

Nonetheless, in tandem with Upper Street Events, the broadcaster has successfully turned TV skein "The Gadget Show" into a lucrative live U.K. event, with sales of 66,000 tickets, and shows sold out six weeks in advance.

But the real cash emerges when a show has international presence. This is where BBC Worldwide has made a big impact, thanks to global franchises like "Dancing With the Stars," "Walking With Dinosaurs" and "Top Gear." Tours based on "Dancing With the Stars" and especially "Walking With Dinosaurs," which plays Madison Square Garden in July, are top performers in the U.S.

And if "Doctor Who" can continue to thrill TV audiences across the Atlantic, a U.S. live tour may not be far off--though timing is key.

"With live shows based on TV properties, it's important not to go too early in the life-cycle of the brand," says Craig Stanley, head of live entertainment at BBC Worldwide, the show's producer. "Live shows tend to come once the show has matured and consolidated its fanbase. For 'Doctor Who,' it is still early in the U.S."