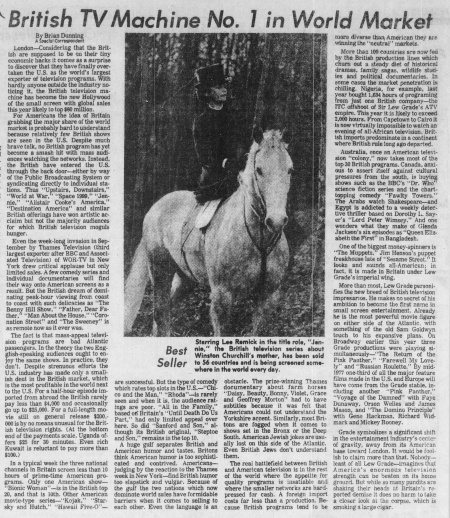 London—Considering that the British are supposed to be on their tiny economic backs it comes as a surprise to discover that they have finally overtaken the U.S. as the world's largest exporter of television programs. With hardly anyone outside the industry noticing it, the British television machine has become the new Hollywood of the small screen with global sales this year likely to top $60 million.

For Americans the idea of Britain grabbing the major share of the world market is probably hard to understand because relatively few British shows are seen in the U.S. Despite much brave talk, no British program has yet become a smash hit with mass audiences watching the networks. Instead, the British have entered the U.S. through the back door—either by way of the Public Broadcasting System or syndicating directly to individual stations. Thus "Upstairs, Downstairs," "World at War," "Space 1999," "Jennie," "Alistair Cooke's America," "Destination America" and similar British offerings have won artistic acclaim but not the majority audiences for which British television moguls hunger.

Even the week-long invasion in September by Thames Television (third largest exporter after BBC and Associated Television) of WOR-TV in New York drew critical applause but only limited sales. A few comedy series and individual documentaries will find their way onto American screens as a result. But the British dream of dominating peak-hour viewing from. coast to coast with such delicacies as "The Benny Hill Show," "Father, Dear Father," "Man About the House," "Coronation Street" and "The Sweeney" is as remote now as it ever was.

The fact is that mass-appeal television programs are bad Atlantic passengers. In the theory the two Engglish-speaking audiences ought to enjoy the same shows. In practice, they don't. Despite strenuous efforts the U.S. industry has made only a smallish dent in the British market, which is the most profitable in the world next to the U.S. For a half-hour episode imported from abroad the British rarely pay less than $4,000 and occasionally go up to $25,000. For a full-length movie still on general release $200,000 is by no means unusual for the British television rights. (At the bottom end of the payments scale, Uganda offers $25 for 30 minutes. Even rich Kuwait is reluctant to pay more than $100.)

In a typical week the three national channels in Britain screen less than 10 hours of prime-time American programs. Only one American show—"Bionic Woman"—is in the British top 20, and that is 10th. Other American movie-type series—"Kojak," "Starsky and Hutch," "Hawaii Five-O" — are successful. But the type of comedy which rates top slots in the U.S.—"Chico and the Man," "Rhoda"—is rarely seen and when it is, the audience ratings are poor. "All in the Family," based on Britain's "Until Death Do Us Part," had only limited appeal over here. So did 'Sanford and Son," although its British original, "Steptoe and Son," remains in the top 10.

A huge gulf separates British and American humor and tastes. Britons think American humor is too sophisticated and contrived. Americans—judging by the reaction to the Thames week in New York—find British humor too slapstick and vulgar. Because of the gulf the two nations which now dominate world sales have formidable barriers when it comes to selling to each other. Even the language is an obstacle. The prize-winning Thames documentary about farm horses -Daisy, Beauty, Bonny, Violet, Grace and Geoffrey Morton" had to have subtitles because it was felt that Americans could not understand the Yorkshire accent. Similarly, most Britons are fogged when it comes to shows set in the Bronx or the Deep South. American .Jewish jokes are usually lost on this side of the Atlantic. Even British Jews don't understand them.

The real battlefield between British and American television is in the rest of the world where the appetite for quality programs is insatiable and where the smaller networks are hard-pressed for cash. A foreign import costs far less than a production. Because British programs tend to be more diverse than. American they are winning the "neutral" markets.

More than 100 countries are now fed by the British production lines which churn out a steady diet of historical dramas, family sagas, wildlife studies and political documentaries. In some cases the market penetration is chilling. Nigeria, for example, last year bought 1,634 hours of programing from just one British company—the ITC offshoot of Sir Lew Grade's ATV empire. This year it is likely to exceed 2,000 hours. From Capetown to Cairo it is now virtually impossible to watch an evening of all-African television. British imports predominate in a continent where British rule long ago departed.

Australia, once an American television "colony," now takes most of the top 30 British programs. Canada, anxious to assert itself against cultural pressures from the south, is buying shows such as the BBC's "Dr. Who" science fiction series and the chart-topping comedy "Fawlty Towers." The Arabs watch Shakespeare—and Egypt is addicted to a weekly detective thriller based on Dorothy L. Sayer's "Lord Peter Wimsey." And one wonders what they make of Glenda Jackson's six episodes as "Queen Elizabeth the First" in Bangladesh.

One of the biggest money-spinners is "The Muppets," Jim Henson's puppet freakhouse late of "Sesame Street." It looks and sounds all-American; in fact, it is made in Britain under Lew Grade's imperial wing.

More than most, Lew Grade personifies the new breed of British television impresarios. He makes no secret of his ambition to become the first name in small screen entertainment. Already he is the most powerful movie figure on either side of the Atlantic, with something of the old Sam Goldwyn touch to his expansive plans. On Broadway earlier this year three Grade productions were playing simultaneously—"The Return of the Pink Panther," "Farewell My Lovely" and "Russian Roulette." By mid-1977 one-third of all the major feature films made in the U.S. and Europe will have come from the Grade stable, including another "Pink Panther," "Voyage of the Damned" with Faye Dunaway, Orson Welles and James Mason, and "The Domino Principle" with Gene Hackman, Richard Widmark and Mickey Rooney.

Grade symbolizes a significant shift in the entertainment industry's center of gravity, away from its American base toward London. It would be foolish to claim more than that. Nobody-least of all Lew Grade—imagines that America's enormous television strength can be beaten on its home ground. But while so many pundits are shaking their heads at Britain's reported demise it does no harm to take a closer look at the corpse, which is smoking a large cigar.

Starring Lee Remick in the title role, "Jennie," the British television series about Winston Churchill's mother, has been sold to 56 countries and it being screened where in the world every day.

Spelling correction: Till Death Us Do Part