British artist flies the flag of controversy at Biennale 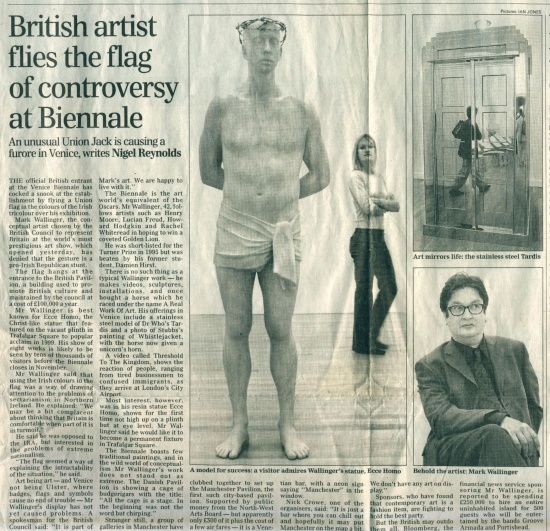 THE official British entrant at the Venice Biennale has cocked a snook at the establishment by flying a Union flag in the colours of the Irish tricolour over his exhibition.

Mark Wallinger, the conceptual artist chosen by the British Council to represent Britain at the world's most prestigious art show, which opened yesterday, has denied that the gesture is a pro-Irish Republican stunt.

The flag hangs at the entrance to the British Pavilion, a building used to promote British culture and maintained by the council at a cost of £100,000 a year.

Mr Wallinger is best known for Ecce Homo, the Christ-like statue that featured on the vacant plinth in Trafalgar Square to popular acclaim in 1999. His show of eight works is likely to be seen by tens of thousands of visitors before the Biennale closes in November.

Mr Wallinger said that using the Irish colours in the flag was a way of drawing attention to the problems of sectarianism in Northern Ireland. He explained: "We may be a bit complacent about thinking that Britain is comfortable when part of it is in turmoil."

He said 'he was opposed to the IRA, but interested in the problems of extreme nationalism.

"The flag seemed a way of explaining the intractability of the situation," he said.

Art being art — and Venice not being Ulster, where badges, flags and symbols cause no end of trouble Mr Wallinger's display has not yet caused problems. A spokesman for the British Council said: "It is part of Mark's art. We are happy to live with it."

The Biennale' is the art world's equivalent of the Oscars. Mr Wallinger, 42, follows artists such as Henry Moore, Lucian Freud, Howard Hodgkin and Rachel Whiteread in hoping to win a coveted Golden Lion.

He was short-listed for the Turner Prize in 1995 but was beaten by his former student, Damien Hirst.

There is no such thing as a typical Wallinger work — he makes videos, sculptures, installations, and once bought a horse which he raced under the name A Real Work Of Art. His offerings in Venice include a stainless steel model of Dr Who's Tar-dis and a photo of Stubbs's painting of Whistlejacket, with the horse now given a unicorn's horn.

A video called Threshold To The Kingdom, shows the reaction of people, ranging from tired businessmen to confused immigrants, as they arrive at London's City Airport.

Most interest, however, was in his resin statue Ecce Homo, shown for the first time not high up on a plinth but at eye level. Mr Wallinger said he would like it to become a permanent fixture in Trafalgar Square.

The Biennale boasts few traditional paintings, and in the wild world of conceptualism Mr Wallinger's work does not stand out as extreme. The Danish Pavilion is showing a cage of budgerigars with the title: "All the cage is a stage. In the beginning was not the word but chirping."

Stranger still, a group of galleries in Manchester have clubbed together to set up the Manchester Pavilion, the first such city-based pavilion. Supported by public money from the North-West Arts Board — but apparently only £300 of it plus the cost of a few air fares — it is a Venetian bar, with a neon sign saying "Manchester" in the window.

Nick Crowe, one of the organisers, said: "It is just a bar where you can chill out and hopefully it may put Manchester on the map a bit. We don't have any art on display."

Sponsors, who have found that contemporary art is a fashion item, are fighting to hold the best party.

But the British may outdo them all. Bloomberg, the financial news service sponsoring Mr Wallinger, is reported to be spending £250,000 to hire an entire uninhabited island for 500 guests who will be entertained by the bands Groove Armada and Portishead.

An unusual Union Jack is causing a furore in Venice, writes Nigel Reynolds