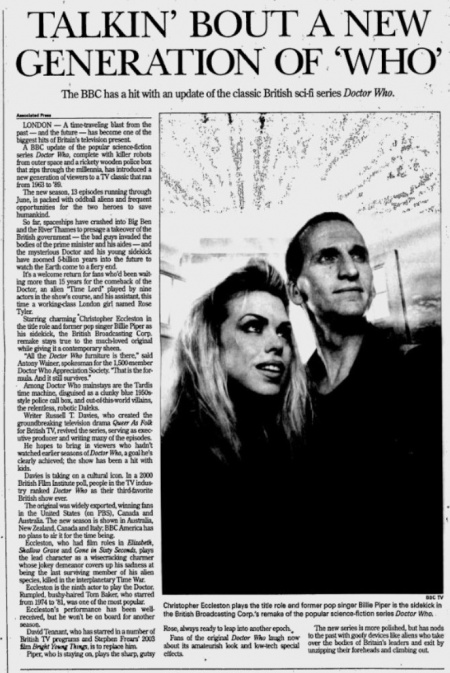 LONDON --- A time-traveling blast from the past --- and the future --- has become one of the biggest hits of Britain's television present.

A BBC update of the hugely popular science fiction series "Doctor Who," complete with killer robots from outer space and a rickety wooden police box that zips through the millennia, has introduced a new generation of viewers to a TV classic that originally ran from 1963 to 1989.

The new season, 13 episodes running through June, is packed with oddball aliens and frequent opportunities for the two heroes to save humankind.

(The old series ran in reruns on PBS in America, although there currently are no plans to air the new shows here.)

So far, spaceships have crashed into Big Ben and the River Thames to presage a takeover of the British government --- the bad guys invaded the bodies of the prime minister and his aides --- and the mysterious Doctor and his young sidekick have zoomed 5 billion years into the future to watch the Earth come to a fiery end.

It's a welcome return for fans who'd been waiting more than 15 years for the comeback of the Doctor --- an alien "Time Lord" who's taken the form of nine different human actors in the course of the show --- and his assistant, this time a working-class London girl named Rose Tyler.

Starring a smooth, charming Christopher Eccleston in the title role and former pop singer Billie Piper as his sidekick, the British Broadcasting Corp. remake stays true to the much-loved original while giving it a contemporary sheen.

"All the 'Doctor Who' furniture is there," said Antony Wainer, spokesman for the 1,500-member Doctor Who Appreciation Society. "That is the formula. And it still survives."

Among Doctor Who mainstays are the Tardis time machine, disguised as a clunky blue 1950s-style police call box, and out-of-this-world villains --- the relentless, robotic Daleks.

Writer Russell T. Davies, who created the groundbreaking television drama "Queer as Folk," revived the series, serving as executive producer and writing many of the episodes. He hopes to bring in viewers who hadn't watched earlier seasons of "Doctor Who," a goal he's clearly achieved --- the show has been a hit with kids.

Davies is taking on a cultural icon. In a 2000 British Film Institute poll, people in the TV industry ranked "Doctor Who" as their third-favorite British show ever. The original was widely exported, winning fans in the United States, Canada and Australia. The new season is being shown in Australia, New Zealand, Canada and Italy, but BBC America has no plans to air it for the time being.