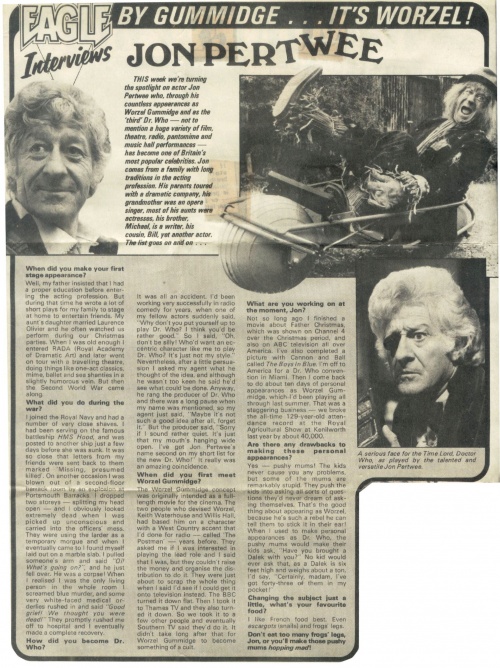 THIS week we're turning the spotlight on actor Jon Pertwee who, through his countless appearances as Worzel Gummidge and as the 'third' Dr. Who — not to mention a huge variety of film, theatre, radio, pantomime and music hall performances —has become one of Britain's most popular celebrities. Jon comes from a family with long traditions in the acting profession. His parents toured with a dramatic company, his grandmother was an opera singer, most of his aunts ware actresses, his brother, Michael, is a writer, his cousin, Bill, yet another actor. The list goes on and on . .

When did you make your first stage appearance?

Well, my father insisted that I had a proper education before entering the acting profession. But during that time he wrote a lot of short plays for my family to stage at home to entertain friends. My aunt's daughter married Laurence Olivier and he often watched us perform during our Christmas parties. When I was old enough I entered RADA (Royal Academy of Dramatic Art) and later went on tour with a travelling theatre, doing things like one-act classics, mime, ballet and sea shanties in a slightly humorous vein. But then the Second World War came along.

What did you do during the war?

I joined the Royal Navy and had a number of very close shaves. I had been serving on the famous battleship HMS Hood, and was posted to another ship just a few days before she was sunk. It was so close that letters from my friends were sent back to them marked 'Missing, presumed killed'. On another occasion I was blown out of a second-floor barrack room by and explosion at Portsmouth Barracks. I dropped two storeys — splitting my head open -- and I obviously looked extremely dead when I was picked up unconscious and carried into the officers' mess. They were using the larder as a temporary morgue and when I eventually came to I found myself laid out on a marble slab. I pulled someone's arm and said "OP What's going on?", and he just fell over. He was a corpse! When I realised I was the only living person in the whole room I screamed blue murder, and some very white-faced medical orderlies rushed in and said "Good grief! We thought you were dead!" They promptly rushed me off to hospital and I eventually made a complete recovery.

How did you become Dr. Who?

It was all an accident. I'd been working very successfully in radio comedy for years, when one of my fellow actors suddenly said, "Why don't you put yourself up to play Dr. Who? I think you'd be rather good." So I said, -Oh, don't be silly! Who'd want an eccentric character like me to play Dr. Who? It's just not my style." Nevertheless, after a little persuasion I asked my agent what he thought of the idea, and although he wasn't too keen he said he'd see what could be done. Anyway, he rang the producer of Dr. Who and there was a long pause when my name was mentioned, so my agent just said. "Maybe it's not such a good idea after all, forget it.- But the producer said, -Sorry if I sound rather quiet. It's just that my mouth's hanging wide open. I've got Jon Pertwee's name second on my short list for the new Dr. Who!" It really was an amazing coincidence.

When did you first meet Worzel Gummidge?

The Worzel Gummidge concept was originally Intended as a full-length movie for the cinema. The two people who devised Worzel, Keith Waterhouse and Willis Hall, had based him on a character with a West Country accent that I'd done for radio -- called 'The Postman' — years before. They asked me if I was interested in playing the lead role and I said that I was, but they couldn't raise the money and organise the distribution to do it. They were just about to scrap the whole thing when I said I'd see if I could get it onto television instead. The BBC turned it down flat. Then I took it to Thames TV and they also turned it down. So we took it to a few other people and eventually Southern TV said they'd do it. It didn't take long after that for Worzel Gummidge to become something of a cult.

What are you working on at the moment, Jon?

Not so long ago I finished a movie about Father Christmas, which was shown on Channel 4 over the Christmas period, and also on ABC television all over America. I've also completed a picture with Cannon and Ball called The Boys In Blue. I'm off to America for a Dr. Who convention in Miami. Then I come back to do about ten days of personal appearances as Worzel Gum-midge, which I'd been playing all through last summer. That was a staggering business — we broke the all-time 129-year-old attendance record at the Royal Agricultural Show at Kenilworth last year by about 40,000.

Are there any drawbacks to making these personal appearances?

Yes — pushy mums! The kids never cause you any problems. but some of the mums are remarkably stupid. They push the kids into asking all sorts of questions they'd never dream of asking themselves. That's the good thing about appearing as Worzel, because he's such a rebel he can tell them to stick it in their ear! When I used to make personal appearances as Dr. Who, the pushy mums would make their kids ask, "Have you brought a Dalek with you?" No kid would ever ask that, as a Dalek is six feet high and weighs about a ton. I'd say, "Certainly, madam, I've got forty-three of them in my pocket!"

Changing the subject just a little, what's your favourite food?

Caption: A serious face for the Time Lord, Doctor Who, as played by the talented and versatile Jon Pertwee.