By Jove! Doddy's in Line for Dr Who 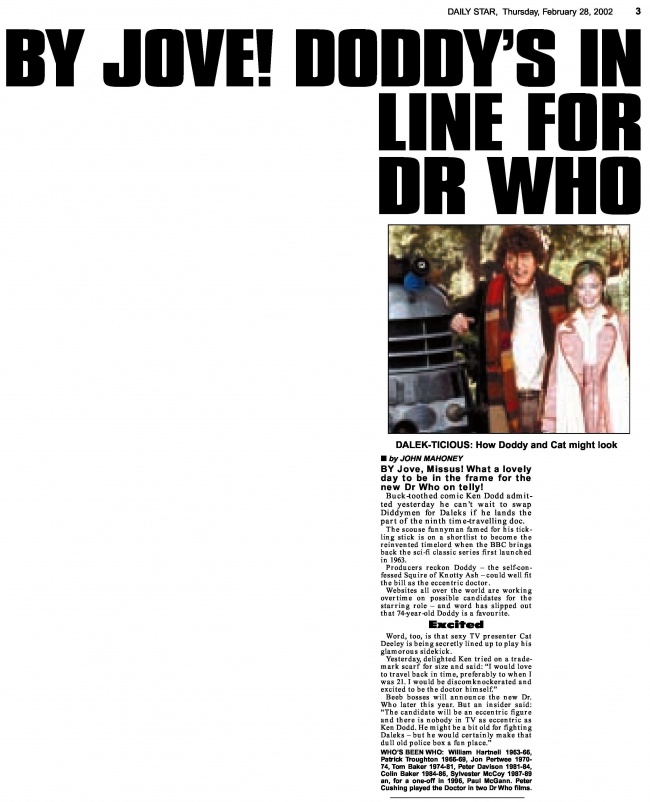 BY Jove, Missus! What a lovely day to be in the frame for the new Dr Who on telly!

Buck-toothed comic Ken Dodd admitted yesterday he can't wait to swap Diddymen for Daleks if he lands the part of the ninth time-travelling doc. The scouse funnym an famed for his tickling stick is on a shortlist to become the reinvented timelord when the BBC brings back the sci-fi classic series first launched in 1963.

Producers reckon Doddy — the self-confessed Squire of Knotty Ash —could well fit the bill as the eccentric doctor.

Websites all over the world are working overtime on possible candidates for the starring role — and word has slipped out that 74-year-old Doddy is a favourite.

Word, too, is that sexy TV presenter Cat Deeley is being secretly lined up to play his glamorous sidekick.

Yesterday, delighted Ken tried on a trademark scarf for size and said: "I would love to travel back in time, preferably to when I was 21. I would be discomknockerated and excited to be the doctor himself"

Beeb bosses will announce the new Dr. Who later this year. But an insider said: "The candidate will be an eccentric figure and there is nobody in TV as eccentric as Ken Dodd. He might be a bit old for fighting Daleks —but he would certainly make that dull old police box a fun place."