Call yourself a Time Lord? 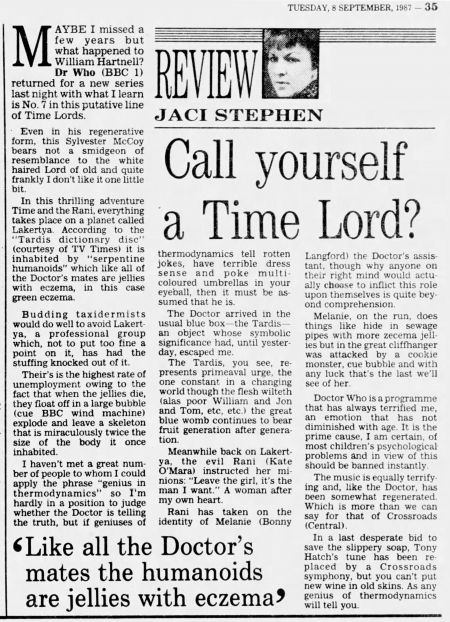 MAYBE I missed a few years but what happened to William Hartnell? Dr Who (BBC 1) returned for a new series last night with what I learn is No. 7 in this putative line of Time Lords.

Even in his regenerative form, this Sylvester McCoy bears not a smidgeon of resemblance to the white haired Lord of old and quite frankly I don't like it one little bit.

In this thrilling adventure Time and the Rani, everything takes place on a planet called Lakertya. According to the "Tardis dictionary disc" (courtesy of TV Times) it is inhabited by "serpentine humanoids" which like all of the Doctor's mates are jellies with eczema, in this case green eczema.

Budding taxidermists would do well to avoid Lakertya, a professional group which, not to put too fine a point on it, has had the stuffing knocked out of it.

Their's is the highest rate of unemployment owing to the fact that when the jellies die, they float off in a large bubble (cue BBC wind machine) explode and leave a skeleton that is miraculously twice the size of the body it once inhabited.

I haven't met a great number of people to whom I could apply the phrase "genius in thermodynamics" so I'm hardly in a position to judge whether the Doctor is telling the truth, but if geniuses of thermodynamics tell rotten jokes, have terrible dress sense and poke multicoloured umbrellas in your eyeball, then it must be assumed that he is.

The Doctor arrived in the usual blue box--the Tardis—an object whose symbolic significance had, until yesterday, escaped me.

The Tardis, you see, represents primeaval urge, the one constant in a changing world though the flesh wilteth (alas poor William and Jon and Tom, etc, etc.) the great blue womb continues to bear fruit generation after generation.

Meanwhile back on Lakertya, the evil Rani (Kate O'Mara) instructed her minions: "Leave the girl, it's the man I want." A woman after my own heart.

Rani has taken on the identity of Melanie (Bonny Langford) the Doctor's assistant, though why anyone on their right mind would actually choose to inflict this role upon themselves is quite beyond comprehension.

Melanie, on the run, does things like hide in sewage pipes with more zecema jellies but in the great cliffhanger was attacked by a cookie monster, cue bubble and with any luck that's the last we'll see of her.

Doctor Who is a programme that has always terrified me, an emotion that has not diminished with age. It is the prime cause, I am certain, of most children's psychological. problems and in view of this should be banned instantly.

The music is equally terrifying and, like the Doctor, has been somewhat regenerated. Which is more than we can say for that of Crossroads (Central).

In a last desperate bid to save the slippery soap, Tony Hatch's tune has been replaced by a Crossroads symphony, but you can't put new wine in old skins. As any genius of thermodynamics will tell you.