Canada hears a Who 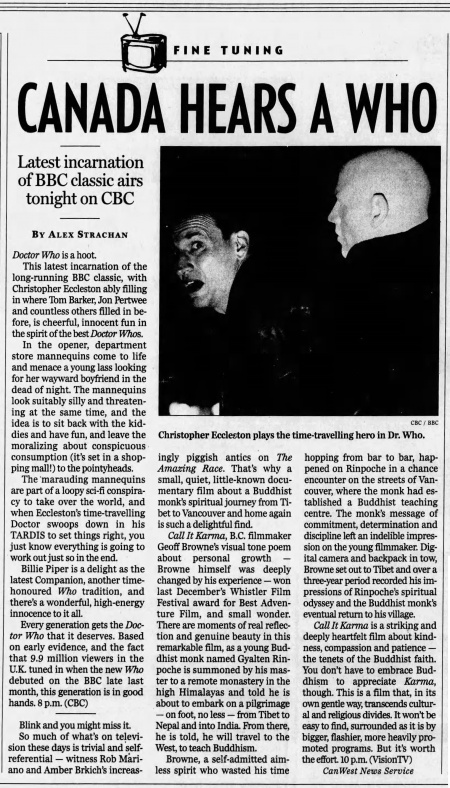 Canada hears a Who: Latest incarnation of BBC classic airs tonight on CBC

Doctor Who is a hoot.

This latest incarnation of the long-running BBC classic, with Christopher Eccleston ably filling in where Tom Barker, Jon Pertwee and countless others filled in before, is cheerful, innocent fun in the spirit of the best Doctor Whos.

In the opener, department store mannequins come to life and menace a young lass looking for her wayward boyfriend in the dead of night. The mannequins look suitably silly and threatening at the same time, and the idea is to sit back with the kiddies and have fun, and leave the moralizing about conspicuous consumption (it's set in a shopping mall!) to the pointyheads.

The marauding mannequins are part of a loopy sci-fi conspiracy to take over the world, and when Eccleston's time-travelling Doctor swoops down in his TARDIS to set things right, you just know everything is going to work out just so in the end.

Billie Piper is a delight as the latest Companion, another time-honoured Who tradition, and there's a wonderful, high-energy innocence to it all.

Every generation gets the Doctor Who that it deserves. Based on early evidence, and the fact that 9.9 million viewers in the U.K. tuned in when the new Who debuted on the BBC late last month, this generation is in good hands. 8 p.m. (CBC)