Capt. Jack Gets Own Show 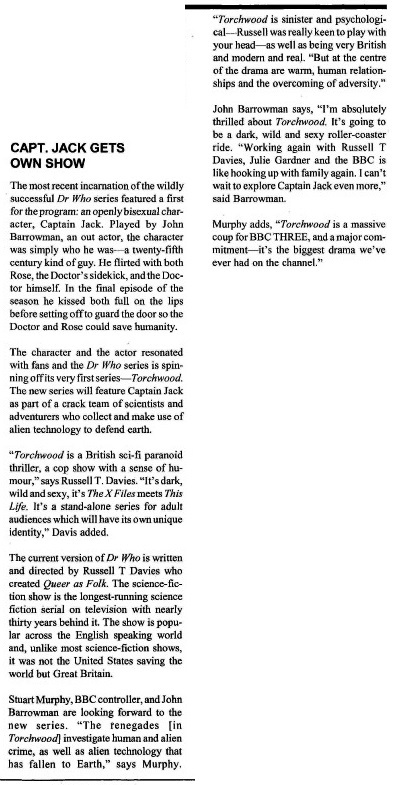 The most recent incarnation of the wildly successful Dr Who series featured a first for the program: an openly bisexual character. Captain Jack. Played by John Barrowman, an out actor, the character was simply who he was—a twenty-fifth century kind of guy. He flirted with both Rose, the Doctor's sidekick, and the Doctor himself. In the final episode of the season he kissed both full on the lips before setting off to guard the door so the Doctor and Rose could save humanity.

The character and the actor resonated with fans and the Dr Who series is spinning off its very first series—Torchwood. The now series will feature Captain Jack as part of a crack team of scientists and adventurers who collect and make use of alien technology to defend earth.

"Torchwood is a British sci-fi paranoid thriller, a cop show with a sense of humour," says Russell T. Davies. "It's dark, wild and sexy, it's The X Files meats This Life. It's a standalone series for adult audiences which will have its own unique identity," Davis added.

The current version of Dr Who is written and directed by Russell T Davies who created Queer as Folk. The science-fiction show is the longest-running science fiction serial on television with nearly thirty years behind it. The show is popular across the English speaking world and, unlike most science-fiction shows, it was not the United States saving the world but Great Britain.

Stuart Murphy, BBC controller, and John Barrowman are looking forward to the new series. "The renegades [in Torchwood] investigate human and alien crime, as well as alien technology that has fallen to Earth," says Murphy.

"Torchwood is sinister and psychological-- Russell was really keen to play with your head—as well as being very British and modern and real. "But at the centre of the drama are warm, human relationships and the overcoming of adversity."

John Barrowman says. "I'm absolutely thrilled about Torchwood. It's going to be a dark, wild and sexy roller-coaster ride. "Working again with Russell T Davies, Julie Gardner and the BBC is like hooking up with family again. I can't wait to explore Captain Jack even more," said Barrowman.

Murphy adds, "Torchwood is a massive coop for BBC THREE, and major commitment—it's the biggest drama we've ever had on the channel."