Carry on, Doctor Who 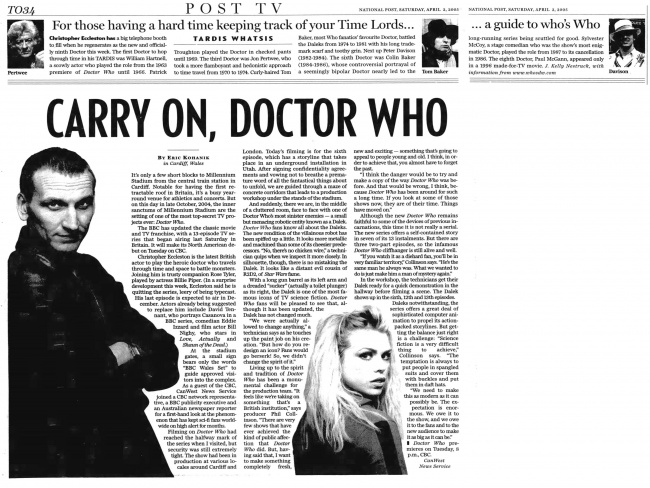 CARDIFF, Wales - It's only a few short blocks to Millennium Stadium from the central train station in Cardiff. Notable for having the first retractable roof in Britain, it's a busy year-round venue for athletics and concerts. But on this day in late October, 2004, the inner sanctums of Millennium Stadium are the setting of one of the most top-secret TV projects ever: Doctor Who.

The BBC has updated the classic movie and TV franchise, with a 13-episode TV series that began airing last Saturday in Britain. It will make its North American debut on Tuesday on CBC.

Christopher Eccleston is the latest British actor to play the heroic doctor who travels through time and space to battle monsters. Joining him is trusty companion Rose Tyler, played by actress Billie Piper. (In a surprise development this week, Eccleston said he is quitting the series, leery of being typecast. His last episode is expected to air in December. Actors already being suggested to replace him include David Tennant, who portrays Casanova in a BBC series, comedian Eddie Izzard and film actor Bill Nighy, who stars in Love, Actually and Shaun of the Dead.)

At the stadium gates, a small sign bears only the words "BBC Wales Set" to guide approved visitors into the complex. As a guest of the CBC, CanWest News Service joined a CBC network representative, a BBC publicity executive and an Australian newspaper reporter for a first-hand look at the phenomenon that has kept sci-fi fans worldwide on high alert for months.

Filming on Doctor Who had reached the halfway mark of the series when I visited, but security was still extremely tight. The show had been in production at various locales around Cardiff and London. Today's filming is for the sixth episode, which has a storyline that takes place in an underground installation in Utah. After signing confidentiality agreements and vowing not to breathe a premature word of all the fantastical things about to unfold, we are guided through a maze of concrete corridors that leads to a production workshop under the stands of the stadium.

And suddenly, there we are, in the middle of a cluttered room, face to face with one of Doctor Who's most sinister enemies -- a small but menacing robotic entity known as a Dalek. Doctor Who fans know all about the Daleks. The new rendition of the villainous robot has been spiffed up a little. It looks more metallic and machined than some of its cheesier predecessors. "No, there's no chicken wire," a technician quips when we inspect it more closely. In silhouette, though, there is no mistaking the Dalek. It looks like a distant evil cousin of R2D2, of Star Wars fame.

With a long gun barrel as its left arm and a dreaded "sucker" (actually a toilet plunger) as its right, the Dalek is one of the most famous icons of TV science fiction. Doctor Who fans will be pleased to see that, although it has been updated, the Dalek has not changed much.

"We were actually allowed to change anything," a technician says as he touches up the paint job on his creation. "But how do you redesign an icon? Fans would go berserk! So, we didn't change the spirit of it."

Living up to the spirit and tradition of Doctor Who has been a monumental challenge for the production team. "It feels like we're taking on something that's a British institution," says producer Phil Collinson. "There are very few shows that have ever achieved the kind of public affection that Doctor Who did. But, having said that, I want to make something completely fresh, new and exciting -- something that's going to appeal to people young and old. I think, in order to achieve that, you almost have to forget the past.

Although the new Doctor Who remains faithful to some of the devices of previous incarnations, this time it is not really a serial. The new series offers a self-contained story in seven of its 13 instalments. But there are three two-part episodes, so the infamous Doctor Who cliffhanger is still alive and well.

"If you watch it as a diehard fan, you'll be in very familiar territory," Collinson says. "He's the same man he always was. What we wanted to do is just make him a man of mystery again."

In the workshop, the technicians get their Dalek ready for a quick demonstration in the hallway before filming a scene. The Dalek shows up in the sixth, 12th and 13th episodes.

Daleks notwithstanding, the series offers a great deal of sophisticated computer animation to propel its action-packed storylines. But getting the balance just right is a challenge: "Science fiction is a very difficult thing to achieve," Collinson says. "The temptation is always to put people in spangled suits and cover them with buckles and put them in daft hats.

"We need to make this as modern as it can possibly be. The expectation is enormous. We owe it to the show, and we owe it to the fans and to the new audience to make it as big as it can be."

For those having a hard time keeping track of your Time Lords...

Christopher Eccleston has a big telephone booth to fill when he regenerates as the new and officially ninth Doctor this week. The first Doctor to hop through time in his TARDIS was William Hartnell, a scowly actor who played the role from the 1963 premiere of Doctor Who until 1966. Patrick Troughton played the Doctor in checked pants until 1969. The third Doctor was Jon Pertwee, who took a more flamboyant and hedonistic approach to time travel from 1970 to 1974. Curly-haired Tom Baker, most Who fanatics' favourite Doctor, battled the Daleks from 1974 to 1981 with his long trademark scarf and toothy grin. Next up Peter Davison (1982-1984). The sixth Doctor was Colin Baker (1984-1986), whose controversial portrayal of a seemingly bipolar Doctor nearly led to the long-running series being scuttled for good. Sylvester McCoy, a stage comedian who was the show's most enigmatic Doctor, played the role from 1987 to its cancellation in 1986. The eighth Doctor, Paul McGann, appeared only in a 1996 made-for-TV movie. J. Kelly Nestruck, with information from www.whosdw.com