Casanova's next conquest is the Tardis 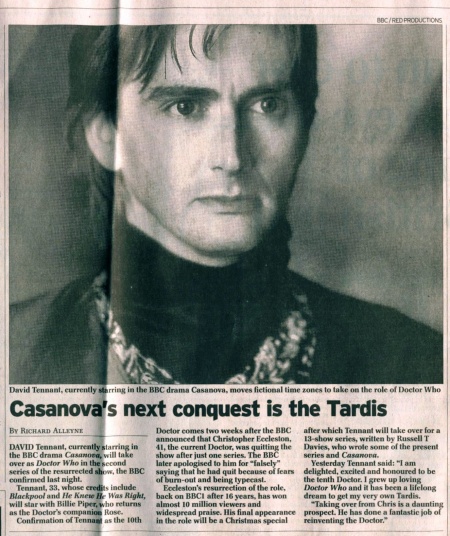 DAVID Tennant, currently starring in the BBC drama Casanova, will take over as Doctor Who in the second series of the resurrected show, the BBC confirmed last night.

Tennant, 33, whose credits include Blackpool and He Knew He Was Right, will star with Billie Piper, who returns as the Doctor's companion Rose.

Confirmation of Tennant as the 10th Doctor comes two weeks after the BBC announced that Christopher Eccleston, 41, the current Doctor, was quitting the show after just one series. The BBC later apologised to him for "falsely" saying that he had quit because of fears of burn-out and being typecast.

Eccleston's resurrection of the role, back on BBC1 after 16 years, has won almost 10 million viewers and widespread praise. His final appearance in the role will be a Christmas special after which Tennant will take over for a 13-show series, written by Russell T Davies, who wrote some of the present series and Casanova.

Yesterday Tennant said: "I am delighted, excited and honoured to be the tenth Doctor. I grew up loving Doctor Who and it has been a lifelong dream to get my very own Tardis.

"Taking over from Chris is a daunting prospect. He has done a fantastic job of reinventing the Doctor."

Caption: David Tennant, currently starring in the BBC drama Casanova, moves fictional time zones to take on the role of Doctor Who