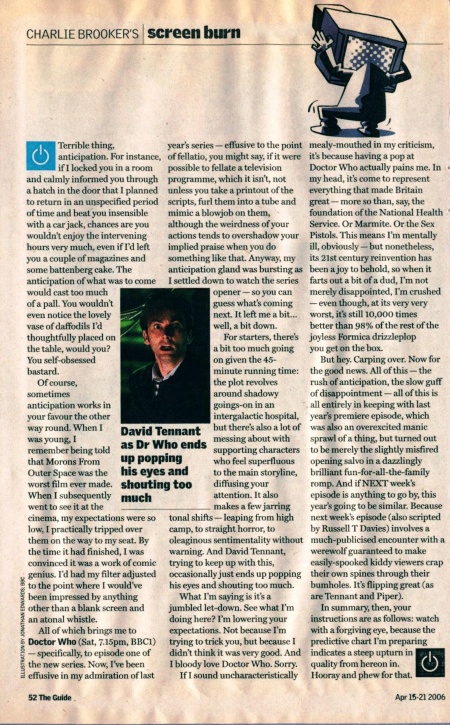 Terrible thing, anticipation. For instance, if I locked you in a room and calmly informed you through a hatch in the door that I planned to return in an unspecified period of time and beat you insensible with a car jack, chances are you wouldn't enjoy the intervening hours very much, even if I'd left you a couple of magazines and some battenberg cake. The anticipation of what was to come would cast too much of a pall. You wouldn't even notice the lovely vase of daffodils I'd thoughtfully placed on the table, would you? You self-obsessed bastard.

Of course, sometimes anticipation works in your favour the other way round. When I was young, I remember being told that Morons From Outer Space was the worst film ever made. When I subsequently went to see it at the cinema, my expectations were so low, I practically tripped over them on the way to my seat. By the time it had finished, I was convinced it was a work of comic genius. I'd had my filter adjusted to the point where I would've been impressed by anything a other than a blank screen and Z an atonal whistle.

For starters, there's a bit too much going on given the 45-minute running time: the plot revolves around shadowy goings-on in an intergalactic hospital, but there's also a lot of messing about with supporting characters who feel superfluous to the main storyline, diffusing your attention. It also makes a few jarring tonal shifts — leaping from high camp, to straight horror, to oleaginous sentimentality without warning. And David Tennant, trying to keep up with this, occasionally just ends up popping his eyes and shouting too much.

What I'm saying is it's a jumbled let-down. See what I'm doing here? I'm lowering your expectations. Not because I'm trying to trick you, but because I didn't think it was very good. And I bloody love Doctor Who. Sorry.

If I sound uncharacteristically mealy-mouthed in my criticism, it's because having a pop at Doctor Who actually pains me. In my head, it's come to represent everything that made Britain great — more so than, say, the foundation of the National Health ' Service. Or Marmite. Or the Sex Pistols. This means I'm mentally ill, obviously — but nonetheless, its 21st century reinvention has been a joy to behold, so when it farts out a bit of a dud, I'm not merely disappointed, I'm crushed — even though, at its very very worst, it's still 10,000 times better than 98% of the rest of the joyless Formica drizzleplop you get on the box.

But hey. Carping over. Now for the good news. All of this — the rush of anticipation, the slow guff of disappointment — all of this is all entirely in keeping with last year's premiere episode, which was also an overexcited manic sprawl of a thing, but turned out to be merely the slightly misfired opening salvo in a dazzlingly brilliant fun-for-all-the-family romp. And if NEXT week's episode is anything to go by, this year's going to be similar. Because next week's episode (also scripted by Russell T Davies) involves a much-publicised encounter with a werewolf guaranteed to make easily-spooked kiddy viewers crap their own spines through their bumholes. It's flipping great (as are Tennant and Piper).

In summary, then, your instructions are as follows: watch with a forgiving eye, because the predictive chart I'm preparing indicates a steep upturn in quality from hereon in.

Hooray and phew for that.