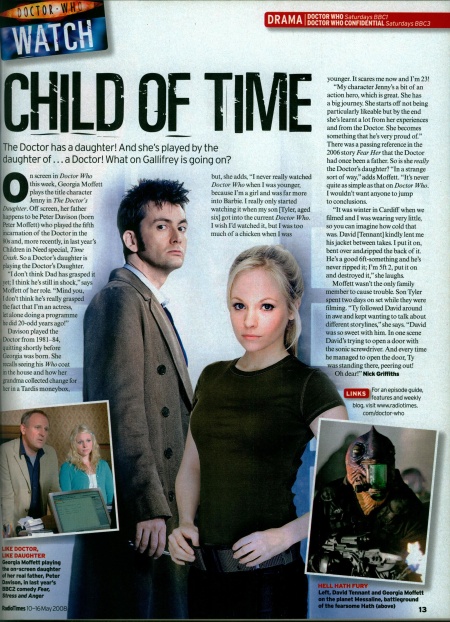 The Doctor has a daughter! And she's played by the daughter of ... a Doctor! What on Gallifrey is going on?

On screen in Doctor Who this week, Georgia Moffett plays the title character Jenny in The Doctor's Daughter. Off screen, her father happens to be Peter Davison (born Peter Moffett) who played the fifth incarnation of the Doctor in the 80s and, more recently, in last year's Children in Need special, Time Crash. So a Doctor's daughter is playing the Doctor's Daughter.

"I don't think Dad has grasped it yet; I think he's still in shock," says Moffett of her role. "Mind you, I don't think he's really grasped the fact that I'm an actress, let alone doing a programme he did 20-odd years ago!" Davison played the Doctor from 1981-84, quitting shortly before Georgia was born. She recalls seeing his Who coat in the house and how her grandma collected change for her in a Tardis moneybox, but, she adds, "I never really watched Doctor Who when I was younger, because I'm a girl and was far more into Barbie. I really only started watching it when my son [Tyler, aged six] got into the current Doctor Who. I wish I'd watched it, but I was too much of a chicken when I was younger. It scares me now and I'm 23!

"My character Jenny's a bit of an action hero, which is great. She has a big journey. She starts off not being particularly likeable but by the end she's learnt a lot from her experiences and from the Doctor. She becomes something that he's very proud of." There was a passing reference in the 2006 story Fear Her that the Doctor had once been a father. So is she really the Doctor's daughter? "In a strange sort of way," adds Moffett. "It's never quite as simple as that on Doctor Who. I wouldn't want anyone to jump to conclusions.

"It was winter in Cardiff when we filmed and I was wearing very little, so you can imagine how cold that was. David [Tennant] kindly lent me his jacket between takes. I put it on, bent over and ripped the back of it. He's a good 6ft-something and he's never ripped it; I'm 5ft 2, put it on and destroyed it," she laughs.

Moffett wasn't the only family member to cause trouble. Son Tyler spent two days on set while they were filming. "Ty followed David around in awe and kept wanting to talk about different storylines," she says. "David was so sweet with him. In one scene David's trying to open a door with the sonic screwdriver. And every time he managed to open the door, Ty as standing there, peering out! Oh dear!"

HELL HATH FURY Left, David Tennant and Georgia Moffett on the planet Messaline, battleground of the fearsome Hath (above)