Children met their number one hero at school fete 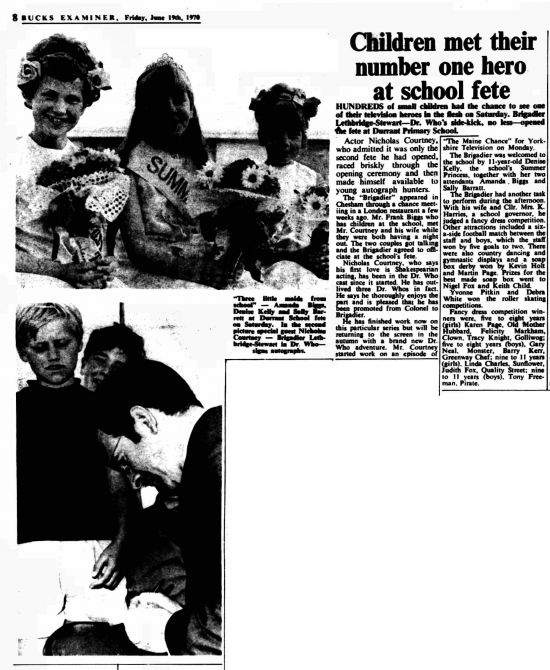 HUNDREDS of small children had the chance to see one of their television heroes in the flesh on Saturday. Brigadier Lethbridge-Stewart—Dr. Who's side-kick. no less—opened the fete at Durraat Primary School.

Actor Nicholas Courtney, who admitted it was only the second fete he had opened, raced briskly through the opening ceremony and then made himself available to young autograph hunters.

The "Brigadier" appeared in Chesham through a chance meeting in a London restaurant a few weeks ago. Mr. Frank Biggs who has children at the school, met Mr. Courtney and his wife while they were both having a night out. The two couples got talking and the Brigadier agreed to officiate at the school's fete.

Nicholas Courtney, who says his first love is Shakespearian acting, has been in the Dr. Who cast since it started. He has outlived three Dr. Whos in fact. He says he thoroughly enjoys the part and is pleased that he has been promoted from Colonel to Brigadier.

He has finished work now on this particular series but will be returning to the screen in the autumn with a brand new Dr. Who adventure. Mr. Courtney started work on an episode of "The Maine Chance" for Yorkshire Television on Monday.

The Brigadier was welcomed to the school by 11-year-old Denise Kelly, the school's Summer Princess, together with her two attendants Amanda Biggs and Sally Barratt.

The Brigadier had another task to perform during the afternoon. With his wife and Cllr. Mrs. K. Harries, a school governor, he judged a fancy dress competition. Other attractions included a six-a-side football match between the staff and boys, which the staff won by five goals to two. There were also country dancing and gymnastic displays and a soap box derby won by Kevin Holt and Martin Page. Prizes for the best made soap box went to Nigel Fox and Keith Child.