Chris Eccleston and I have shared a lot 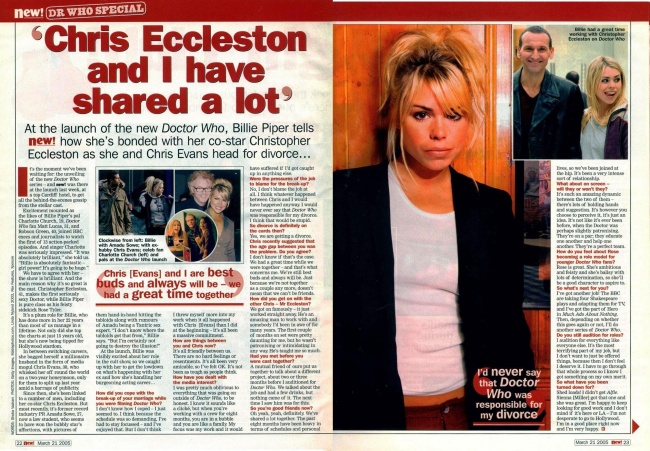 At the launch of the new Doctor Who, Billie Piper tells new! how she's bonded with her co-star Christopher Eccleston as she and Chris Evans head for divorce...

It's the moment we've been waiting for: the unveiling of the new Doctor Who series - and new! was there at the launch last week, at a top Cardiff hotel, to get all the behind-the-scenes gossip from the stellar cast.

Excitement mounted as the likes of Billie Piper's pal Charlotte Church, 19, Doctor Who fan Matt Lucas, 31, and Robson Green, 40, joined BBC execs and journalists to watch the first of 13 action-packed episodes. And singer Charlotte was seriously impressed. "It was absolutely brilliant," she told us. "Billie is absolutely fantastic girl power! It's going to be huge."

We have to agree with her the show is brilliant. And the main reason why it's so great is the cast. Christopher Eccleston, 41, makes the first seriously sexy Doctor, while Billie Piper is pure class as his feisty sidekick Rose Tyler.

It's a plum role for Billie, who has done more in her 22 years than most of us manage in a lifetime. Not only did she top the charts at just 15 years old, but she's now being tipped for Hollywood stardom.

In between switching careers, she bagged herself a millionaire husband in the form of media mogul Chris Evans, 38, who whisked her off round the world on a two-year honeymoon, only for them to split up last year amid a barrage of publicity.

Since then, she's been linked to a number of men, including her co-star Chris Eccleston. But most recently, it's former record industry PR Amadu Sowe, 27, now a law student, who seems to have won the bubbly star's affections, with pictures of them hand-in-hand hitting the tabloids along with rumours of Amadu being a Tantric sex expert. "I don't know where the tabloids got that from," Billie says. "But I'm certainly not going to destroy the illusion!"

At the launch, Billie was visibly excited about her role in the cult show, so we caught up with her to get the lowdown on what's happening with her ex and how she's handling her burgeoning acting career...

How did you cope with the break-up of your marriage while you were filming Doctor Who?

I don't know how I coped - I just seemed to. I think because the schedule was so demanding, had to stay focussed - and I've enjoyed that. But I don't think I threw myself more into my work when it all happened with Chris [Evans] than I did at the beginning - it's all been a massive commitment.

How are things between you and Chris now?

It's all friendly between us. There are no hard feelings or resentments. It's all been very amicable, so I've felt OK. It's not been as tough as people think.

How have you dealt with the media interest?

I was pretty much oblivious to everything that was going on outside of Doctor Who, to be honest. I know it sounds like a cliché, but when you're working with a crew for eight months, you are in a bubble and you are like a family. My focus was my work and it would have suffered if I'd got caught up in anything else.

Were the pressures of the job to blame for the break-up?

No, I don't blame the job at all. I think whatever happened between Chris and I would have happened anyway. I would never ever say that Doctor Who was responsible for my divorce. I think that would be stupid.

So divorce is definitely on the cards then?

Yes, we are getting a divorce.

Chris recently suggested that the age gap between you was the problem. Do you agree? I don't know if that's the case. We had a great time while we were together - and that's what concerns me. We're still best buds and always will be. Just because we're not together as a couple any more, doesn't mean that we can't be friends.

How did you get on with the other Chris - Mr Eccleston? We got on famously - it just worked straight away. He's an amazing man to work with and somebody I'd been in awe of for many years. The first couple of months on set were pretty daunting for me, but he wasn't patronising or intimidating in any way. He's taught me so much.

Had you met before you were cast together?

A mutual friend of ours put us together to talk about a different project, about two or three months before I auditioned for Doctor Who. We talked about the job and had a few drinks, but nothing came of it. The next time I saw him was for this. So you're good friends now? Oh yeah, yeah, definitely. We've shared a lot together. The past eight months have been heavy in terms of schedules and personal lives, so we've been joined at the hip. It's been a very intense sort of relationship.

What about on screen - will they or won't they?

It's such an amazing dynamic between the two of them there's lots of holding hands and suggestion. It's however you choose to perceive it, it's just an idea. It's not like it's ever been before, when the Doctor was perhaps slightly patronising. They're on a par; they educate one another and help one another. They're a perfect team.

How do you feel about Rose becoming a role model for younger Doctor Who fans?

Rose is great. She's ambitious and feisty and she's ballsy with lots of determination, so she'll be a good character to aspire to.

So what's next for you?

I've got another job! The BBC are taking four Shakespeare plays and adapting them for TV, and I've got the part of Hero in Much Ado About Nothing. Then, depending on whether this goes again or not, I'll do another series of Doctor Who.

Do you still audition for roles?

I audition for everything like everyone else. It's the most terrifying part of my job, but I don't want to just be offered things, because then I don't feel I deserve it. I have to go through that whole process so I know I got something on my own merit.

So what have you been turned down for?

Shed loads! I didn't get Alfie. Sienna [Miller] got that one and she was great. I'm happy to keep looking for good work and I don't mind if it's here or LA - I'm not desperate to go to Hollywood. I'm in a good place right now and I'm very happy.

Caption: Billie had a great time working with Christopher Eccleston on Doctor Who