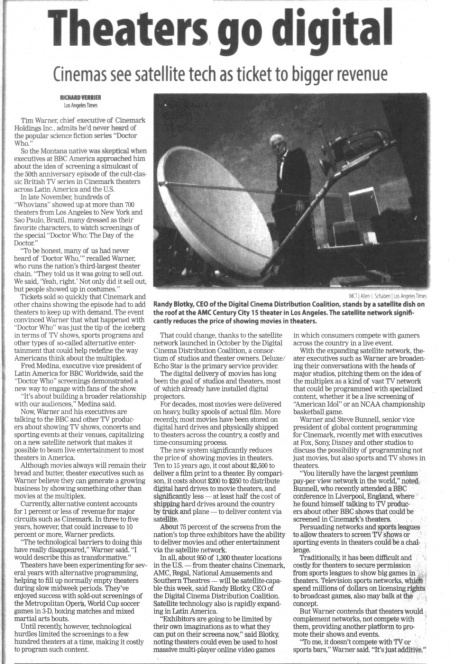 So the Montana native was skeptical when executives at BBC America approached him about the idea of screening a simulcast of the 50th anniversary episode of the cult-classic British TV series in Cinemark theaters across Latin America and the U.S.

In late November, hundreds of "Whovians" showed up at more than 700 theaters from Los Angeles to New York and Sao Paulo, Brazil, many dressed as their favorite characters, to watch screenings of the special "Doctor Who: The Day of the Doctor."

"To be honest, many of us had never heard of 'Dr. Who,'" recalled Warner, who runs the nation's third-largest theater chain. "They told us it was going to sell out. We said, 'Yeah, right.' Not only did it sell out, but people showed up in costumes."

Tickets sold so quickly that Cinemark and other chains showing the episode had to add theaters to keep up with demand. The event convinced Warner that what happened with "Dr. Who" was just the tip of the iceberg in terms of TV shows, sports programs and other types of so-called alternative entertainment that could help redefine the way Americans think about the multiplex.

Fred Medina, executive vice president of Latin America for BBC Worldwide, said the "Dr. Who" screenings demonstrated a new way to engage with fans of the show.

"It's about building a broader relationship with our audiences," Medina said.

Now, Warner and his executives are talking to the BBC and other TV producers about showing TV shows, concerts and sporting events at their venues, capitalizing on a new satellite network that makes it possible to beam live entertainment to most theaters in America.

Although movies will always remain their bread and butter, theater executives such as Warner believe they can generate a growing business by showing something other than movies at the multiplex.

Currently, alternative content accounts for 1 percent or less of revenue for major circuits such as Cinemark. In three to five years, however, that could increase to 10 percent or more, Warner predicts.

"The technological barriers to doing this have really disappeared," Warner said. "I would describe this as transformative."

Until recently, however, technological hurdles limited the screenings to a few hundred theaters at a time, making it costly to program such content.

That could change, thanks to the satellite network launched in October by the Digital Cinema Distribution Coalition, a consortium of studios and theater owners. Deluxe/ Echo Star is the primary service provider.

The digital delivery of movies has long been the goal of studios and theaters, most of which have already installed digital projectors.

For decades, most movies were delivered on heavy, bulky spools of actual film. More recently, most movies have been stored on digital hard drives and physically shipped to theaters across the country, a costly and time-consuming process.

The new system significantly reduces the price of showing movies in theaters. Ten to 15 years ago, it cost about $2,500 to deliver a film print to a theater. By comparison, it costs about $200 to $250 to distribute digital hard drives to movie theaters, and significantly less - at least half the cost of shipping hard drives around the country by truck and plane - to deliver content via satellite.