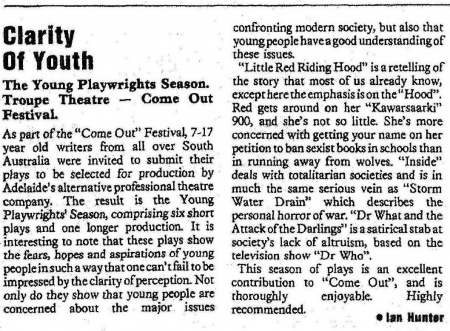 As part of the "Come Out" Festival, 7-17 year old writers from all over South Australia were invited to submit their plays to be selected for production by Adelaide's alternative professional theatre company. The result is the Young Playwrights' Season, comprising six short plays and one longer production. It is interesting to note that these plays show the fears, hopes and aspirations of young people in such a way that one can't fail to be impressed by the clarity ofperception. Not only do they show that young people are concerned about the major issues confronting modern society, but also that young people have a good understanding of these issues.

"Little Red Riding Hood" is a retelling of the story that most of us already know, except here the emphasis is on the "Hood". Red gets around on her "Kawarsaarki" 900, and she's not so little. She's more concerned with getting your name on her petition to ban sexist books in schools than in running away from wolves. "Inside" deals with totalitarian societies and is in much the same serious vein as "Storm Water Drain" which describes the personal horror of war. "Dr What and the Attack of the Darlings" is a satirical stab at society's lack of altruism, based on the television show "Dr Who".

This season of plays is art excellent contribution to "Come. Out", and is thoroughly enjoyable. Highly, recommended.