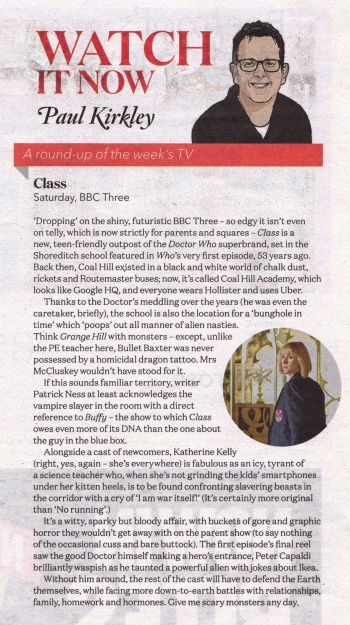 A round-up of the week's TV

'Dropping' on the shiny, futuristic BBC Three - so edgy it isn't even on telly, which is now strictly for parents and squares - Class is a new, teen-friendly outpost of the Doctor Who superbrand, set in the Shoreditch school featured in Who's very first episode, 53 years ago. Back then, Coal Hill existed in a black and white world of chalk dust, rickets and Routemaster buses; now, it's called Coal Hill Academy, which looks like Google HQ, and everyone wears Hollister and uses Uber.

Thanks to the Doctor's meddling over the years (he was even the caretaker, briefly), the school is also the location for a 'bunghole in time' which 'poops' out all manner of alien nasties. Think Grange Hill with monsters - except, unlike the PE teacher here, Bullet Baxter was never possessed by a homicidal dragon tattoo. Mrs McCluskey wouldn't have stood for it.

If this sounds familiar territory, writer Patrick Ness at least acknowledges the vampire slayer in the room with a direct reference to Buffy - the show to which Class owes even more of its DNA than the one about the guy in the blue box.

Alongside a cast of newcomers, Katherine Kelly (right, yes, again - she's everywhere) is fabulous as an icy, tyrant of a science teacher who, when she's not grinding the kids' smartphones under her kitten heels, is to be found confronting slavering beasts in the corridor with a cry of 'I am war itself!' (It's certainly more original than 'No running'.)

It's a witty, sparky but bloody affair, with buckets of gore and graphic horror they wouldn't get away with on the parent show (to say nothing of the occasional cuss and bare buttock). The first episode's final reel saw the good Doctor himself making a hero's entrance, Peter Capaldi brilliantly waspish as he taunted a powerful alien with jokes about Ikea.

Without him around, the rest of the cast will have to defend the Earth themselves, while facing more down-to-earth battles with relationships, family, homework and hormones. Give me scary monsters any day.