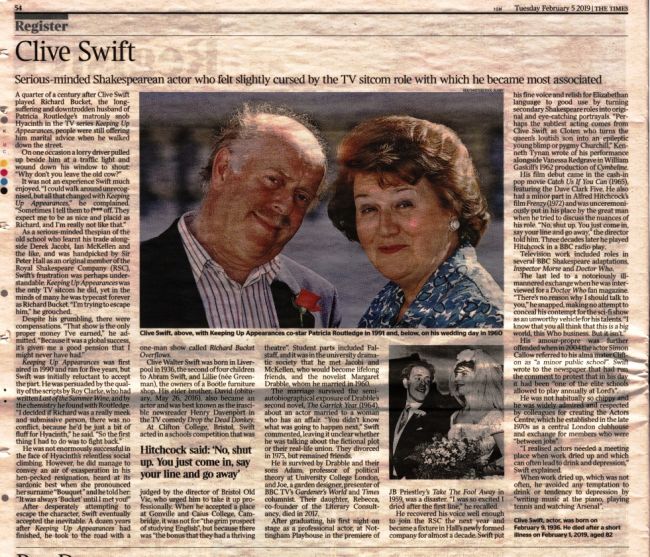 Clive Swift, above, with Keeping Up Appearances co-star Patricia Routledge in 1991 and, below, on his wedding day in 1960

A quarter of a century after Clive Swift played Richard Bucket, the long-suffering and downtrodden husband of Patricia Routledge's matronly snob Hyacinth in the TV series Keeping Up Appearances, people were still offering him marital advice when he walked down the street.

On one occasion a lorry driver pulled up beside him at a traffic light and wound down his window to shout "Why don't you leave the old cow?"

It was not an experience Swift much enjoyed. "I could walk around unrecognised, but all that changed with Keeping Up Appearances," he complained. "Sometimes I tell them to f*** off. They expect me to be as nice and placid as Richard, and I'm really not like that."

As a serious-minded thespian of the old school who learnt his trade alongside Derek Jacobi, Ian McKellen and the like, and was handpicked by Sir Peter Hall as an original member of the Royal Shakespeare Company (RSC), Swift's frustration was perhaps understandable. Keeping Up Appearances was the only TV sitcom he did, yet in the minds of many he was typecast forever as Richard Bucket. "I'm trying to escape him: he grouched.

Despite his grumbling, there were compensations. "That show is the only proper money I've earned: he admitted. "Because it was a global success, it's given me a good pension that I might never have had."

Keeping Up Appearances was first aired in 1990 and ran for five years, but Swift was initially reluctant to accept the part. He was persuaded by the quality of the scripts by Roy Clarke, who had written Last of the Summer Wine, and by the chemistry he found with Routledge. "I decided if Richard was a really meek and submissive person, there was no conflict, because he'd be just a bit of fluff for Hyacinth: he said. "So the first thing I had to do was to fight back!

He was not enormously successful in the face of Hyacinth's relentless social climbing. However, he did manage to convey an air of exasperation in his hen-pecked resignation, heard at its sardonic best when she pronounced her surname "Bouquet" and he told her

"It was always 'Bucket' until I met you!" After desperately attempting to escape the character, Swift eventually accepted the inevitable. A dozen years after Keeping Up Appearances had finished, he took to the road with a one-man show called Richard Bucket Overflows.

Clive Walter Swift was born in Liverpool in 1936, the second of four children to Abram Swift, and Lillie (née Greenman), the owners of a Bootle furniture shop. His elder brother, David (obituary, May 26, 2016), also became an actor and was best known as the irascible newsreader Henry Davenport in the TV comedy Drop the Dead Donkey.

At Clifton College, Bristol, Swift acted in a schools competition that was judged by the director of Bristol Old Vic, who urged him to take it up professionally. When he accepted a place at Gonville and Caius College, Cambridge, it was not for "the grim prospect of studying English", but because there was "the bonus that they had a thriving theatre". Student parts included Falstaff, and it was in the university dramatic society that he met Jacobi and McKellen, who would become lifelong friends, and the novelist Margaret Drabble, whom he married in 1960.

The marriage survived the semi-autobiographical exposure of Drabble's second novel, The Garrick Year (1964), about an actor married to a woman who has an affair. "You didn't know what was going to happen next: Swift commented, leaving it unclear whether he was talking about the fictional plot or their real-life union. They divorced in 1975, but remained friends.

He is survived by Drabble and their sons Adam, professor of political theory at University College London, and Joe, a garden designer, presenter of BBC TV's Gardener's World and Times columnist. Their daughter, Rebecca, co-founder of the Literary Consultancy, died in 2017.

After graduating, his first night on stage as a professional actor, at Nottingham Playhouse in the premiere of JB Priestley's Take The Fool Away in 1959, was a disaster. "I was so excited I dried after the first line," he recalled.

He recovered his voice well enough to join the RSC the next year and became a fixture in Hall's newly formed company for almost a decade. Swift put his fine voice and relish for Elizabethan language to good use by turning secondary Shakespeare roles into original and eye-catching portrayals. "Perhaps the subtlest acting comes from Clive Swift as Cloten who turns the queen's loutish son into an epileptic young blimp or pygmy Churchill: Kenneth Tynan wrote of his performance alongside Vanessa Redgrave in William Gaskill's 1962 production of Cyrnbeline.

His film debut came in the cash-in pop movie Catch Us If You Can (1965), featuring the Dave Clark Five. He also had a minor part in Alfred Hitchcock's film Frenzy (1972) and was unceremoniously put in his place by the great man when he tried to discuss the nuances of his role. "No, shut up. You just come in, say your line and go away," the director told him. Three decades later he played Hitchcock in a BBC radio play.

The last led to a notoriously ill-mannered exchange when he was interviewed for a Doctor Who fan magazine. "There's no reason why 1 should talk to you," he snapped, making no attempt to conceal his contempt for the sci-fi show as an unworthy vehicle for his talents. "I know that you all think that this is a big world, this Who business. But it isn't"

His amour-propre was further offended when in 2004 the actor Simon Callow referred to his alma mater Clifton as "a minor public school"' Swift wrote to the newspaper that had run the comment to protest that in his day it had been "one of the elite schools allowed to play annually at Lord's".

He was not habitually so chippy and he was widely admired and respected by colleagues for creating the Actors Centre, which he established in the late 1970s as a central London clubhouse and exchange for members who were "between jobs".

"I realised actors needed a meeting place when work dried up and which can often lead to drink and depression: Swift explained.

When work dried up, which was not often, he avoided any temptation to drink or tendency to depression by "writing music at the piano, playing tennis and watching Arsenal".