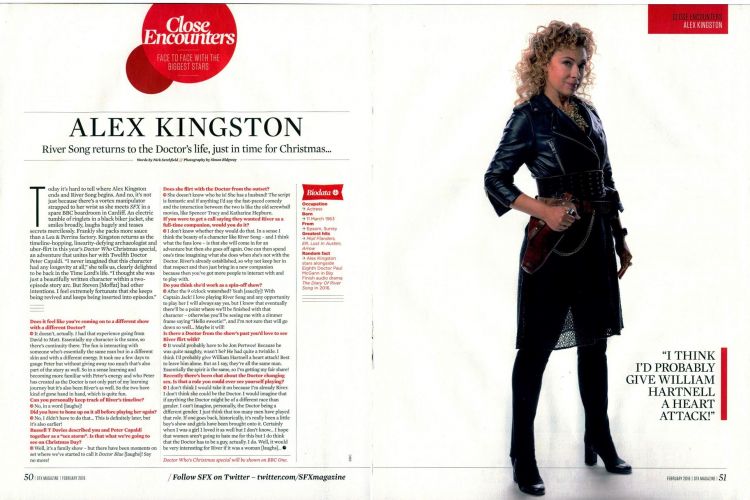 FACE TO FACE WITH THE BIGGEST STARS

River Song returns to the Doctor's life, just in time for Christmas...

Today it's hard to tell where Alex Kingston ends and River Song begins. And no, it's not just because there's a vortex manipulator strapped to her wrist as she meets SFX in a spare BBC boardroom in Cardiff. An electric tumble of ringlets in a black biker jacket, she smiles broadly, laughs hugely and teases secrets mercilessly. Frankly she packs more sauce than a Lea & Perrin factory. Kingston returns as the timeline-hopping, linearity-defying archaeologist and uber-flirt in this year's Doctor Who Christmas special, an adventure that unites her with Twelfth Doctor Peter Capaldi. "I never imagined that this character had any longevity at all," she tells us, clearly delighted to be back in the Time Lord's life. "I thought she was just a beautifully written character within a two-episode story arc. But Steven [Moffat] had other intentions. I feel extremely fortunate that she keeps being revived and keeps being inserted into episodes."

It doesn't, actually. I had that experience going from David to Matt. Essentially my character is the same, so there's continuity there. The fun is interacting with someone who's essentially the same man but in a different skin and with a different energy. It took me a few days to gauge Peter but without giving away too much that's also part of the story as well. So in a sense learning and becoming more familiar with Peter's energy and who Peter has created as the Doctor is not only part of my learning journey but it's also been River's as well. So the two have kind of gone hand in hand, which is quite fun.

Can you personally keep track of River's timeline?

Did you have to bone up on it all before playing her again?

No, I didn't have to do that... This is definitely later, but it's also earlier!

Russell T Davies described you and Peter Capaldi together as a "sex storm". Is that what we're going to see on Christmas Day?

Well, it's a family show - but there have been moments on set where we've started to call it Doctor Blue [laughs]! Say no more!

Does she flirt with the Doctor from the outset?

She doesn't know who he is! She has a husband! The script is fantastic and if anything I'd say the fast-paced comedy and the interaction between the two is like the old screwball movies, like Spencer Tracy and Katharine Hepburn.

If you were to get a call saying they wanted River as a full-time companion, would you do it?

I don't know whether they would do that. In a sense I think the beauty of a character like River Song - and I think what the fans love - is that she will come in for an adventure but then she goes off again. One can then spend one's time imagining what she does when she's not with the Doctor. River's already established, so why not keep her in that respect and then just bring in a new companion because then you've got more people to interact with and to play with.

Do you think she'd work as a spin-off show? After the 9 o'clock watershed? Yeah [saucily]! With Captain Jack! I love playing River Song and any opportunity to play her I will always say yes, but I know that eventually there'll be a point where we'll be finished with that character - otherwise you'll be seeing me with a zimmer frame saying "Hello sweetie", and I'm not sure that will go down so well... Maybe it will!

Is there a Doctor from the show's past you'd love to see River flirt with?

It would probably have to be Jon Pertwee! Because he was quite naughty, wasn't he? He had quite a twinkle. I think I'd probably give William Hartnell a heart attack! Best to leave him alone. But as I say, they're all the same man. Essentially the spirit is the same, so I'm getting my fair share!

Recently there's been chat about the Doctor changing sex. Is that a role you could ever see yourself playing?

I don't think I would take it on because I'm already River. I don't think she could be the Doctor. I would imagine that if anything the Doctor might be of a different race than gender. I can't imagine, personally, the Doctor being a different gender. I just think that too many men have played that role. If one goes back, historically, it's really been a little boy's show and girls have been brought onto it. Certainly when I was a girl I loved it as well but I don't know... I hope that women aren't going to hate me for this but I do think that the Doctor has to be a guy, actually. I do. Well, it would be very interesting for River if it was a woman [laughs]...

Doctor Who's Christmas special will be shown on BBC One.