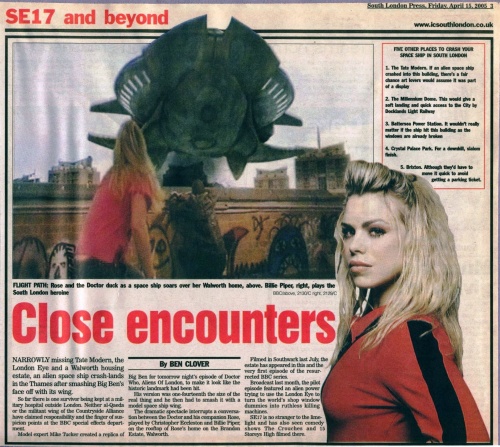 NARROWLY missing Tate Modern, the London Eye and a Walworth housing estate, an alien space ship crash-lands in the Thames after smashing Big Ben's face off with its wing.

So far there is one survivor being kept at a military hospital outside London. Neither al-Qaeda or the militant wing of the Countryside Alliance have claimed responsibility and the finger of suspicion points at the BBC special effects department.

Model expert Mike 'Ricker created a replica of Big Ben for tomorrow night's episode of Doctor Who, Aliens Of London, to make it look like the historic landmark had been hit.

His version was one-fourteenth the size of the real thing and he then had to smash it with a model space ship wing.

The dramatic spectacle interrupts a conversation between the Doctor and his companion Rose, played by Christopher Eccleston and Billie Piper, on the rooftop of Rose's home on the Brandon Estate, Walworth.

Filmed in Southwark last July, the estate has appeared in this and the very first episode of the resurrected BBC series.

SE17 is no stranger to the limelight and has also seen comedy shows The Crouches and 15 Storeys High filmed there.

Caption: FLIGHT PATH: Rose and the Doctor duck as a space ship soars over her Walworth home, above, Billie Piper, right, plays the South London heroine

FIVE OTHER PLACES TO CRASH YOUR SPACE SHIP IN SOUTH LONDON

1. The Tate Modern. If an alien space ship crashed into this building, there's a fair chance art lovers would assume it was part of a display

2. The Millennium Dome. This would give a soft landing and quick access to the City by Doddands Light Railway

3. Battersea Power Station. it wouldn't really matter if the ship hit this building as the windows are already broken

5. Brixton. Although they'd have to move it quick to avoid getting a parking ticket.