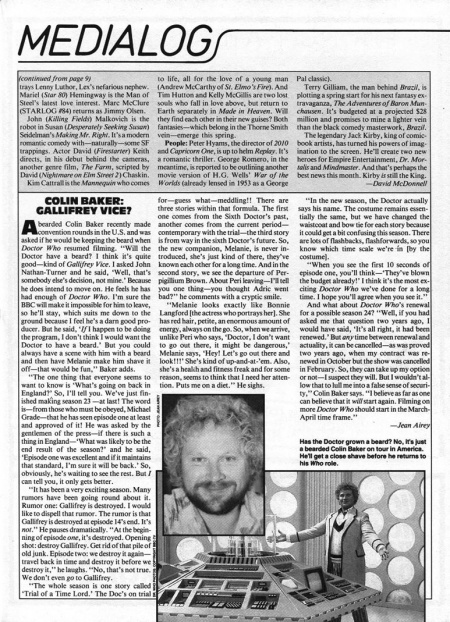 A bearded Colin Baker recently made convention rounds in the U.S. and was asked if he would be keeping the beard when Doctor Who resumed filming. "Will the Doctor have a beard? I think it's quite good—kind of Gallifrey Vice. I asked John Nathan-Turner and he said, 'Well, that's somebody else's decision, not mine.' Because he does intend to move on. He feels he has had enough of Doctor Who. I'm sure the BBC will make it impossible for him to leave, so he'll stay, which suits me down to the ground because I feel he's a darn good producer. But he said, 'If! happen to be doing the program, I don't think I would want the Doctor to have a beard.' But you could always have a scene with him with a beard and then have Melanie make him shave it off—that would be fun," Baker adds.

"The one thing that everyone seems to want to know is 'What's going on back in England?' So, I'll tell you. We've just finished making season 23 —at last! The word is—from those who must be obeyed, Michael Grade—that he has seen episode one at least and approved of it! He was asked by the gentlemen of the press—if there is such a thing in England—'What was likely to be the end result of the season?' and he said, 'Episode one was excellent and if it maintains that standard, I'm sure it will be back.' So, obviously, he's waiting to see the rest. But I can tell you, it only gets better.

"It has been a very exciting season. Many rumors have been going round about it. Rumor one: Gallifrey is destroyed. I would like to dispell that rumor. The rumor is that Gallifrey is destroyed at episode 14's end. It's not." He pauses dramatically. "At the beginning of episode one, it's destroyed. Opening shot: destroy Gallifrey. Get rid of that pile of 2 old junk. Episode two: we destroy it again—travel back in time and destroy it before we destroy it," he laughs. "No, that's not true. 8 We don't even go to Gallifrey.

"The whole season is one story called 'Trial of a Time Lord.' The Doe's on trial g for—guess what—meddling!! There are three stories within that formula. The first one comes from the Sixth Doctor's past, another comes from the current period—contemporary with the trial—the third story is from way in the sixth Doctor's future. So, the new companion, Melanie, is never introduced, she's just kind of there, they've known each other for a long time. And in the second story, we see the departure of Perpigillium Brown. About Peri leaving—I'll tell you one thing—you thought Adric went bad?" he comments with a cryptic smile.

"Melanie looks exactly like Bonnie Langford (the actress who portrays her]. She has red hair, petite, an enormous amount of energy, always on the go. So, when we arrive, unlike Peri who says, 'Doctor, I don't want to go out there, it might be dangerous,' Melanie says, 'Hey! Let's go out there and look! !! ' She's kind of up-and-at-'em. Also, she's a health and fitness freak and for some reason, seems to think that I need her attention. Puts me on a diet." He sighs.

"In the new season, the Doctor actually says his name. The costume remains essentially the same, but we have changed the waistcoat and bow tie for each story because it could get a bit confusing this season. There are lots of flashbacks, flashforwards, so you know which time scale we're in [by the costume].

"When you see the first 10 seconds of episode one, you'll think—'They've blown the budget already!' think it's the most exciting Doctor Who we've done for a long time. I hope you'll agree when you see it."

And what about Doctor Who's renewal for a possible season 24? "Well, if you had asked me that question two years ago, I would have said, 'It's all right, it had been renewed.' But anytime between renewal and actuality, it can be cancelled—as was proved two years ago, when my contract was renewed in October but the show was cancelled in February. So, they can take up my option or not—I suspect they will. But I wouldn't allow that to lull me into a false sense of security," Colin Baker says. "I believe as far as one can believe that it will start again. Filming on more Doctor Who should start in the March-April time frame.

Caption: Has the Doctor grown a beard? No, it's just a bearded Colin Baker on tour in America. He'll get a close shave before he returns to his Who role.