Coming soon .. invasion of the aliens 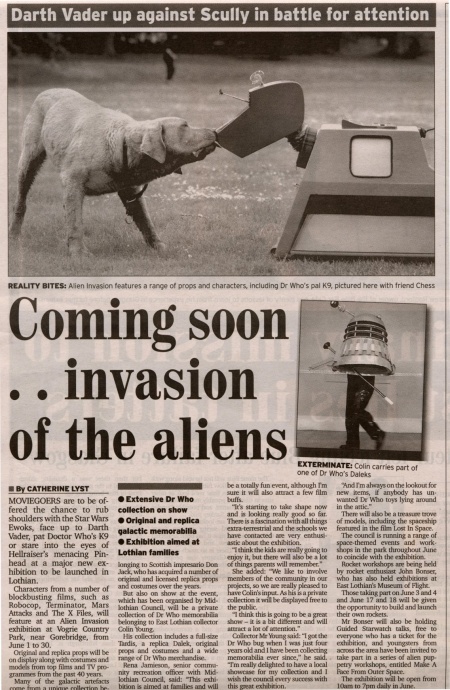 Darth Vader up against Scully in battle for attention

Coming soon .. invasion of the aliens

MOVIEGOERS are to be offered the chance to rub shoulders with the Star Wars Ewoks, face up to Darth Vader, pat Doctor Who's K9 or stare into the eyes of Hellraiser's menacing Pinhead at a major new exhibition to be launched in Lothian.

Characters from a number of blockbusting films, such as Robocop, Terminator, Mars Attacks and The X Files, will feature at an Alien Invasion exhibition at Vogrie Country Park, near Gorebridge, from June 1 to 30.

Original and replica props will be on display along with costumes and models from top films and TV programmes from the past 40 years.

Many of the galactic artefacts come from a unique collection belonging to Scottish impresario Don Jack, who has acquired a number of original and licensed replica props and costumes over the years.

But also on show at the event, which has been organised by Midlothian Council, will be a private collection of Dr Who memorabilia belonging to East Lothian collector Colin Young.

His collection includes a full-size Tardis, a replica Dalek, original props and costumes and a wide range of Dr Who merchandise. Rena Jamieson, senior community recreation officer with Midlothian Council, said: "This exhibition is aimed at families and will be a totally fun event, although I'm sure it will also attract a few film buffs.

"It's starting to take shape now and is looking really good so far. There is a fascination with all things extra-terrestrial and the schools we have contacted are very enthusiastic about the exhibition.

"I think the kids are really going to enjoy it, but there will also be a lot of things parents will remember." She added: "We like to involve members of the community in our projects, so we are really pleased to have Colin's input. As his is a private collection it will be displayed free to the public.

"I think this is going to be a great show — it is a bit different and will attract a lot of attention."

Collector Mr Young said: "I got the Dr Who bug when I was just four years old and I have been collecting memorabilia ever since," he said. "I'm really delighted to have a local showcase for my collection and I wish the council every success with this great exhibition.

"And I'm always on the lookout for new items, if anybody has unwanted Dr Who toys lying around in the attic."

There will also be a treasure trove of models, including the spaceship featured in the film Lost In Space. The council is running a range of space-themed events and workshops in the park throughout June to coincide with the exhibition. Rocket workshops are being held by rocket enthusiast John Bonser, who has also held exhibitions at East Lothian's Museum of Flight. Those taking part on June 3 and 4 and June 17 and 18 will be given the opportunity to build and launch their own rockets.

Mr Bonser will also be holding Guided Starwatch talks, free to everyone who has a ticket for the exhibition, and youngsters from across the area have been invited to take part in a series of alien puppetry workshops, entitled Make A Face From Outer Space.

The exhibition will be open from 10am to 7pm daily in June.

• Extensive Dr Who collection on show

EXTERMINATE: Colin carries part of one of Dr Who's Daleks