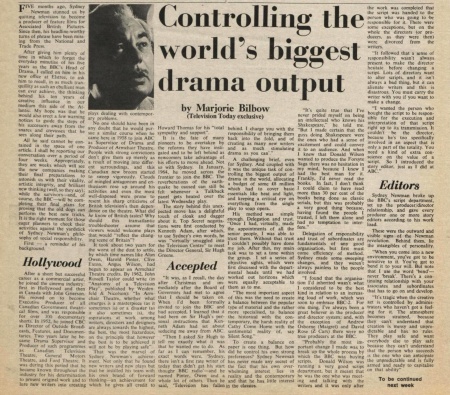 FIVE months ago, Sydney Newman stunned us by quitting television to become a producer of feature films for Associated British Pictures. Since then, his headline-worthy turns of phrase have been missing from the National and Trade Press.

After giving him plenty of time in which to forget the everyday minutiae of his five years as the BBC's Head of Drama. I called on him in his new office at Elstree, to ask him to recall, in as much tranquillity as such an ebullient man can ever achieve, the thinking behind his ten years of creative influence in our medium this side of the Atlantic. My hope was that he would also erect a few warning notices to guide the steps of his successors away from the snares and crevasses that he sees along their path.

All he said cannot be contained in the space of one article. I shall be reporting our conversation over a period of four weeks. Appropriately, they are weeks which will see the new companies making their final preparations to astonish us with their vitality. artistic integrity, and brilliant new thinking (well, so they say); while the survivors—and, of course, the BBC—will be completing their final plans for proving that the old dogs can perform the best new tricks.

It is the right moment for those eager planners to check their activities against the yardstick of Sydney Newman's philosophy of social responsibility.

First — a reminder of his background.

After a short but successful career as a commercial artist. he joined the cinema industry: first in Hollywood and then in Canada with John Grierson. He moved on to become Executive Producer of all Canadian Government theatrical films, and was responsible for over 300 documentary shorts. In 1952, he joined CBC as Director of Outside Broadcasts, Features, and Documentaries. Two years later he became Drama Supervisor and Producer of such programmes as Canadian Television Theatre, General Motors Theatre, and Ford Theatre. It was during this period that he became known throughout the industry for his determination to present original work and to lure new writers into creating plays dealing with contemporary problems.

No one should have been in any doubt that he would pursue a similar course when he came here in 1958 to join ABC as Supervisor of Drama and Producer of Armchair Theatre. People with strong convictions don't give them up merely as a result of moving into different surroundings, and this Canadian new broom started to sweep vigorously. Clouds of mingled antagonism and enthusiasm rose up around his activities and even the most well-disposed were prone to resent his sharp criticisms of British television's then dependence on the theatre. What did he know of British tastes? Why should this transatlantic troubleshooter assume that viewers would welcome plays that would "reflect the changing scene of Britain"?

It took about two years for the worst of the dust to settle, by which time names like Alun Owen. Harold Pinter, Clive Exton, Angus Wilson, had begun to appear on Armchair Theatre credits. By 1962. John Russell Taylor could write (in "Anatomy of a Television Play", published by Weidenfeld & Nicolson): "In Armchair Theatre, whether what emerges is a masterpiece (as it sometimes is) or a disaster (as it also sometimes is), the aspirations at work among writers, directors and designers are always towards the highest, the best, the most hazardous. on the principle that however the best is to be achieved it will not be by playing safe".

That was the marvel of Sydney Newman's achievement. Not only that he found new writers and new plays but that he instilled his team with his own brand of forward thinking--an achievement for which he gives all credit to Howard Thomas for his "total sympathy and support".

It is the fate of many pioneers to be overtaken by the reforms they have instigated and to be left behind as newcomers take advantage of his efforts to move ahead. Not so with Sydney. In January. 1964, he moved across the frontier to join the BBC. The reverberations of the earthquake he caused can still be felt whenever a Talkback panel gets heated over the latest Wednesday play.

The story behind this unexpected move has a delightful touch of cloak and dagger about it. Top Secret negotiations were first conducted by Kenneth Adam, after which, to use Sydney's own words, he was "virtually smuggled into the Television Centre" to meet the Director General. Sir Hugh Greene.

"It was, as I recall, the day after Christmas and immediately after the Board of Governors had met to agree that 1 should be taken on. When I'd been formally invited to join the BBC and had accepted, I learned that it had been on Sir Hugh's personal instructions that Kenneth Adam had set about seducing me away from ABC.

"Then I asked Sir Hugh to tell me exactly what it was that he wanted me to do. As far as I can remember, his exact words were, 'Sydney, there isn't a first rate writer of today that didn't get his start thoughr BBC radio'—and he named Pinter, Owen and a whole lot of others. Then he said, 'Television has fallen behind. I charge you with the responsibility of bringing them back into the fold, and of creating as many new writers and as much stimulating drama as you can'."

A challenging brief, even for Sydney. And coupled with it was the unique task of controlling the biggest output of drama in the world, allocating a budget of some £8 million which had to cover basic essentials like heat and light, and keeping a critical eye on everything from the single play to soap opera.

His method was simple enough. Delegation and trust. "Once I had, virtually, made the appointments of all the senior people, I was able to trust them. Without that trust I couldn't possibly have done my job. After this, my main task was to set a tone within the group. 1 set a series of objective sights, which were first discussed with the departmental heads until we had worked out horizons which were equally acceptable to them as to me.

"The most important aspect of this was the need to create a balance between the popular type of material and the rather more specialised, to balance the historical with the contemporary, the harsh reality of Cathy Come Home with the sentimental reality of, say Silent Song."

To create a balance on paper is one thing. But how did he control his own strong preferences? Sydney Newman has never made any secret of the fact that his own overwhelming interest lies in reality and the contemporary and that he has little interest in the classics.

"It's quite true that I've never prided myself on being an intellectual who knows his Shakespeare," he told me. "But I made certain that the guys doing Shakespeare were the ones who had a sense of excitement and could convey it to an audience. And when I knew that Donald Wilson wanted to produce the Forsyte Saga there was no hesitation in my mind, because I knew I had the best man for it. Frankly, I'd never read the books. In fact. I don't think I could claim to have read more than 30 per cent of the books being done as classic serials, but this was probably a very good thing because. having found the people I trusted, I left them alone and had no temptation to interfere."

Delegation of responsibility and trust of subordinates are fundamentals of any good organisation, but first must come efficiency of method. Sydney made some sweeping changes, and they weren't always painless to the people involved.

"I found that the organisation I'd inherited wasn't what I considered to be the best kind in relation to an increasing load of work, which was soon to embrace BBC-2. For one thing. I've always been a great believer in the producer and director system; and, with the exception of Andrew Osborne (Maigret) and David Rose (Z Cars) there were no true producers at the BBC.

"Probably the most important change 1 made was to break up the whole process by which the BBC was buying scripts. Donald Wilson was running a very good script department, but it meant that he was the one who was meeting and talking with the writers and it was only after the work was completed that the script was handed to the person who was going to be responsible for it. There were some exceptions, but on the whole the directors (or producers. as they were then) were divorced from the writers.

"It followed that a sense of responsibility wasn't always present to make the director hesitate before changing a script. Lots of directors want to alter scripts, and it isn't always a bad thing, but it can alienate writers and this is disastrous. You must carry the writer with you if you want to make a change.

"I wanted the person who bought the script to be responsible for the execution and interpretation of that script right up to its transmission. It couldn't be the director, because he's too specifically involved in an aspect that is only a part of the totality. You need a kind of extra conscience on the value of a script. So I introduced the story editor, just as I did at ABC."

Sydney Newman broke up the BBC's script department, set up the producer/director relationship, and gave every producer one or more story editors according to his work load.

These were the outward and visible signs of the Newman revolution. Behind them, lie the intangibles of personality.

"When you come into a new environment, you've got to be sensitive to it. You've got to bend it to your will. But note that I use the word 'bend'—never 'break'. There's a continuing relationship with your associates and subordinates that has to go on and develop.

"It's tragic when the creative act is controlled by administrators who haven't got a feeling for it. The atmosphere becomes strained, because they can't understand that creation is messy and unpredictable and has no rules. They play safe and want everybody else to play safe because they can't understand that the person who succeeds is the one who can anticipate the unpredictable and is fully armed and ready to capitalise on that ability"