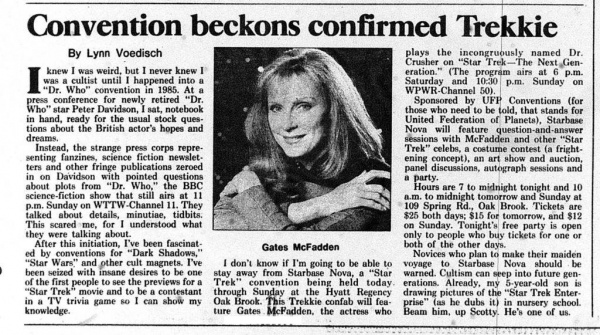 I knew I was weird, but I never knew I was a cultist until I happened into a "Dr. Who" convention in 1985. At a press conference for newly retired "Dr. Who" star Peter Davidson, I sat, notebook in hand, ready for the usual stock questions about the British actor's hopes and dreams.

Instead, the strange press corps representing fanzines, science fiction newsletters and other fringe publications zeroed in on Davidson with pointed questions about plots from "Dr. Who," the BBC science-fiction show that still airs at 11 p.m. Sunday on WTTW-Channel 11. They talked about details, minutiae, tidbits. This scared me, for I understood what they were talking about.

After this initiation, I've been fascinated by conventions for "Dark Shadows," "Star Wars" and other cult magnets. I've been seized with insane desires to be one of the first people to see the previews for a "Star Trek" movie and to be a contestant in a TV trivia game so I can show my knowledge.

I don't know if I'm going to be able to stay away from Starbase Nova, a "Star Trek" convention being held today through Sunday at the Hyatt Regency Oak Brook. This Trekkie confab will feature Gates McFadden, the actress who plays the incongruously named Dr. Crusher on "Star Trek - The Next Generation." (The program airs at 6 p.m. Saturday and 10:30 p.m. Sunday on WPWR-Channel 50).

Sponsored by UFP Conventions (for those who need to be told, that stands for United Federation of Planets), Starbase Nova will feature question-and-answer sessions with McFadden and other "Star Trek" celebs, a costume contest (a frightening concept), an art show and auction, panel discussions, autograph sessions and a party.

Hours are 7 to midnight tonight and 10 a.m. to midnight tomorrow and Sunday at 109 Spring Rd., Oak Brook. Tickets are $25 both days; $15 for tomorrow, and $12 on Sunday. Tonight's free party is open only to people who buy tickets for one or both of the other days.

Novices who plan to make their maiden voyage to Starbase Nova should be warned. Cultism can seep into future generations. Already, my 5-year-old son is drawing pictures of the "Star Trek Enterprise" (as he dubs it) in nursery school. Beam him, up Scotty. He's one of us.