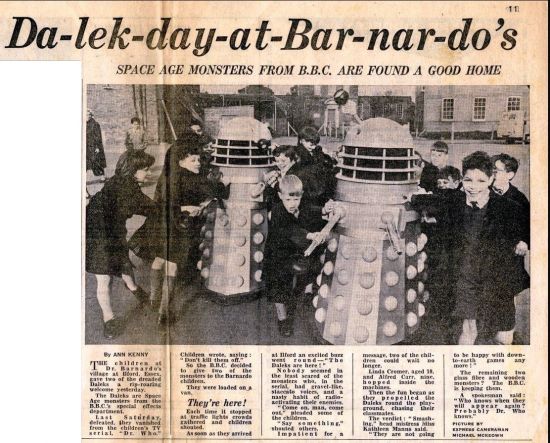 SPACE AGE MONSTERS FROM B.B.C. ARE FOUND A GOOD HOME

THE children at Dr. Barnardo's village at Ilford. Essex. gave two of the dreaded Daleks a rip-roaring welcome yesterday.

The Daleks are Space Age monsters from the B.B.C.'s special effects department.

Last Saturday, defeated, they vanished from the children's TV serial. "Dr. Who." Children wrote, saying: "Don't kill them off."

So the B.B.C. decided to give two of the monsters to the Bernardo children.

They were loaded on a van.

Each time it stopped at traffic lights crowds gathered and children shouted.

As soon as they arrived at Ilford an excited buzz went round —"The Daleks are here!"

Nobody seemed in the least scared of the monsters who, in the serial, had gravel-like, staccato voices, and a nasty habit of radio-activating their enemies.

"Come on, man, come out," pleaded some of the children.

"Say something," shouted others.

Impatient for a message, two of the children could wait no longer.

Then the fun began as they propelled the Daleks round the playground, chasing their classmates.

"They are not going to be happy with down-to-earth games any more!"

The remaining two glass fibre and wooden monsters? The B.B.C. is keeping them.

A spokesman said : "Who knows when they will appear again? Probably Dr. Who knows."