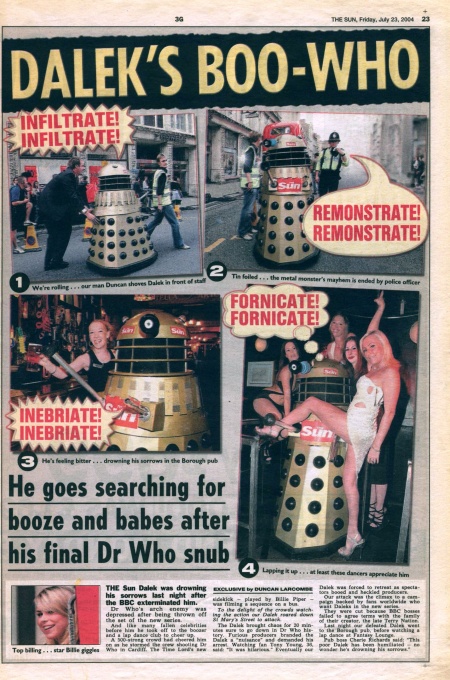 THE Sun Dalek was drowning his sorrows last night after the BBC exterminated him.

Dr Who's arch enemy was depressed after being thrown off the set of the new series.

And like many fallen celebrities before him he took off to the boozer and a lap dance club to cheer up.

A 500-strong crowd had cheered him on as he stormed the crew shooting Dr Who in Cardiff. The Time Lord's new sidekick — played by Billie Piper — was filming a sequence on a bus.

To the delight of the crowds watching the action our Dalek roared down St Mary's Street to attack.

The Dalek brought chaos for 20 minutes sure to go down in Dr Who history. Furious producers branded the Dalek a "nuisance" and demanded his arrest. Watching fan Tony Young, 36, said: "It was hilarious." Eventually our

Dalek was forced to retreat as spectators booed and heckled producers.

Our attack was the climax to a campaign backed by fans worldwide who want Daleks in the new series.

They were cut because BBC bosses failed to agree terms with the family of their creator, the late Terry Nation.

Last night our defeated Dalek went to the Borough pub, before watching a lap dance at Fantasy Lounge.

FORNICATE! FORNICATE! Lapping it up ... at least these dancers appreciate him