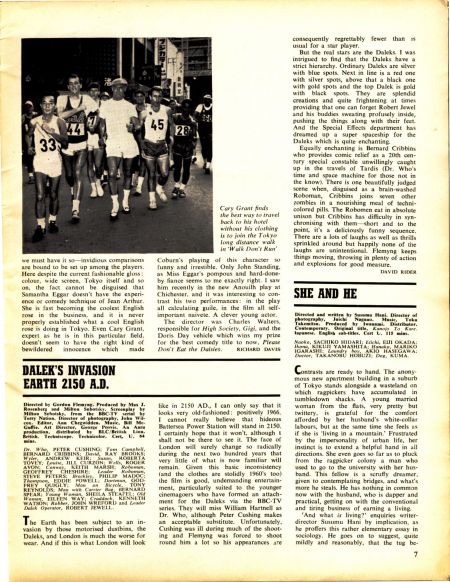 The Earth has been subject to an invasion by those motorised dustbins, the Daleks, and London is much the worse for wear. And if this is what London will look like in 2150 AD., I can only say that it looks very old-fashioned: positively 1966. I cannot really believe that hideous Battersea Power Station will stand in 2150. I certainly hope that it won't, although t shall not be there to see it. The face of London will surely change so radically during the next two hundred years that very little of what is now familiar will remain. Given this basic inconsistency (and the clothes are stolidly 1960's too) the film is good, undemanding entertainment, particularly suited to the younger cinemagoers who have formed an attachment for the Daleks via the BBC-TV series. They will miss William Hartnell as Dr. Who, although Peter Cushing makes an acceptable substitute. Unfortunately, Cushing was ill during much of the shooting and Flemyng was forced to shoot round him a lot so his appearances are But the real stars are the Daleks. I was intrigued to find that the Daleks have a strict hierarchy. Ordinary Daleks are silver with blue spots. Next in line is a red one with silver spots, above that a black one with gold spots and the top Dalek is gold with black spots. They are splendid creations and quite frightening at times providing that one can forget Robert Jewel and his buddies sweating profusely inside, pushing the things along with their feet. And the Special Effects department has dreamed up a super spaceship for the Daleks which is quite enchanting.

Equally enchanting is Bernard Cribbins who provides comic relief as a 20th century special constable unwillingly caught up in the travels of Tardis (Dr. Who's time and space machine for those not in the know). There is one beautifully judged scene when, disguised as a brain-washed Roboman, Cribbins joins seven other zombies in a nourishing meal of techni-colored pills. The Robomen eat in absolute unison but Cribbins has difficulty in synchronising with them—short and to the point, it's a deliciously funny sequence. There are a lots of laughs as well as thrills sprinkled around but happily none of the laughs are unintentional. Flemyng keeps things moving, throwing in plenty of action and explosions for good measure