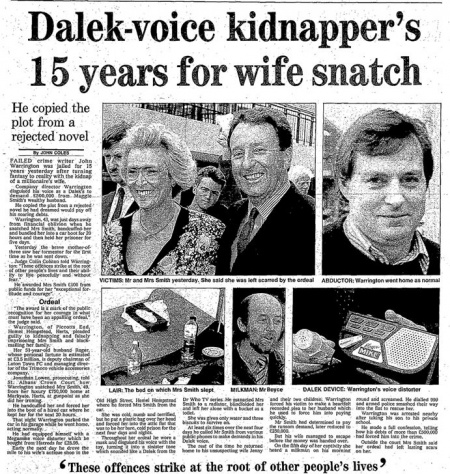 He copied the plot from a rejected novel

FAILED crime writer John Warrington was jailed for 15 years yesterday after turning fantasy to reality with the kidnap of a millionaire's wife.

Company director Warrington disguised his voice as a Dalek's to demand £500,000 from Maggie Smith's wealthy husband.

He copied the plot from a rejected novel he had dreamed would pay off his soaring debts.

Warrington, 43, was just days away from financial oblivion when he snatched Mrs Smith, handcuffed-her and bundled her into a car boot for 20 hours and then held her prisoner for five days.

Yesterday the brave mother-of-three saw her tormentor for the first time as he was sent down.

Judge Colin Colston told Warrington: "These offences strike at the root of other people's lives and their ability to live peacefully and without fear."

He awarded Mrs Smith £100 from public funds for her "exceptional fortitude and courage".

"The award is a mark of the public recognition for her courage in what must have been an appalling ordeal," the judge said.

Her 51-year-old husband Roger, whose personal fortune is estimated at £3.5 million, is deputy chairman of Luton Town FC and managing director of the Trimoco vehicle accessories company.

Jonathan Lowen, prosecuting, told St. Albans Crown Court how Warrington snatched Mrs Smith, 49, from her luxury £750,000 home at Markyate, Herts, at gunpoint as she did her ironing.

He handcuffed her and forced her into the boot of a hired car where he kept her for the next 20 hours.

That night Warrington parked the car in his garage while he went home, acting normally.

He had equipped himself with a Megamike voice distorter which he bought from Harrods for £28.95.

Early the next day he drove the mile to his wife's antique shop in the Old High Street, Heniel Heinpstead where he forced Mrs Smith from the car.

She was cold; numb and terrified, but he put a plastic bag over her head and forced her into the attic flat that was to be her bare, cold prison for the next four days and nights.

Throughout her ordeal he wore a mask and disguised his voice with the toy, turning it into 'a sinister tone which sounded like a Dalek from the Dr Who TV series. He manacled Mrs Smith to a radiator, blindfolded her and left her alone with a bucket as a toilet.

She was given only water and three biscuits to survive on.

At least six times over the next four days he called Mr Smith from various public phones to make demands in his Dalek voice.

The rest of the time he returned home to his unsuspecting wife Jenny and their two children. Warrington forced his victim to make a heartfelt recorded plea to her husband which he used to force him into paying quickly.

Mr Smith had determined to pay the ransom demand, later reduced to £250,000.

But his wife managed to escape before the money was handed over.

On the fifth day of her captivity she heard a milkman on his morning round arid screamed. He dialled 999 and armed police smashed their way into the fiat to rescue her.

Warrington was arrested nearby after taking his son to his private school.

He made a full confession, telling how his debts of more than £500,000 had forced him into the crime,

Outside the court Mrs Smith said her ordeal had left lasting scars on her.

VICTIMS: Mr and Mrs Smith yesterday. She said she was left scarred by the ordeal

LAIR: The bed on which Mrs Smith slept