Dalek Actor a 'Star' in Pulpit 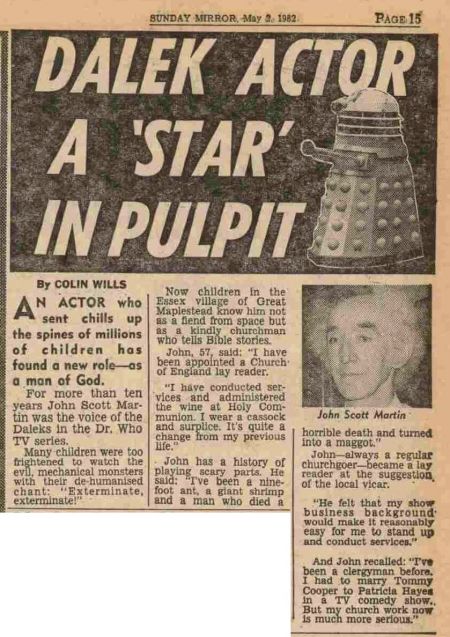 AN ACTOR who sent chills up the spines of millions of children has found a new role—as a man of God.

For more than ten years John Scott Martin was the voice of the Daleks in the Dr. Who TV series.

Many children were too frightened to watch the evil. mechanical monsters with their de-humanised chant: "Exterminate, exterminate!"

Now children in the Essex village of Great Maplestead know him not as a fiend from space but as a kindly churchman who tells Bible stories.

John, 57 said: "I have been appointed a Church of England lay reader.

"I have conducted services and administered the wine at Holy Communion. I wear a cassock and surplice. It's quite a change from my previous life."

John has a history of playing scary parts. He said: "I've been a nine-foot ant, a giant shrimp and a man who died a horrible death and turned into a maggot."

John—always a regular churchgoer—became a lay reader at the suggestion of the local vicar.

"He felt that my show business background would make it reasonably easy for me to stand up and conduct services."

And John recalled: "I've been a clergyman before. I had to marry Tommy Cooper to Patricia Hayes in a TV comedy show. But my church work now Is much more serious."